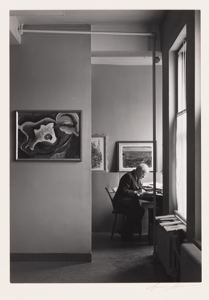 "Rather than say Stieglitz influenced me in my work, I would say that he revealed me to myself. Paul Strand's work showed me the potential of photography as an art form; Stieglitz gave me the confidence that I could express myself through that art form."

Ansel Adams's (1902â1984) description of Alfred Stieglitz, as well as the countless portraits of Stieglitz created by artists, attest to this man's importance to American art. Through his galleries such as 291 and An American Place and publications such as Camera Notes and Camera Work , Stieglitz supported the work of many young artists including Georgia O'Keeffe, Paul Strand, Eduard Steichen, and Marsden Hartley. Inrallying artists, publishing their works, and arranging exhibitions, Stieglitz became a mentor around whom the first
American avant-garde was formed.

A photographer himself, Stieglitz was largely responsible for bringing photography into the realm of fine art. Photo-historian Naomi Rosenblum writes: "In both roles -as expressive photographer and impressario--he probably has had a more profound influence on the course of aesthetic photography in America than any other individual." In 1902 Stieglitz and Eduard Steichen co-founded the Photo-Secession, a loosely-organized group of artists who advocated photography as a means of self-expression rather than as a documentary tool. After the dissolution of this group, Stieglitz continued to battle for recognition of the photograph as art object by showcasing photography in his publications and galleries.

It was Adams's admiration for Stieglitz as both practitioner and promoter that first brought him to An American Place in 1932. The gallery was established in 1929 and remained open until Stieglitz's death in 1946. Both Adams and Stieglitz favored "straight" as opposed to manipulated photography. Perhaps this is why Stieglitz gave Adams a one-man show in 1936. That Adams should photograph Stieglitz in this particular gallery surrounded by the modernist works he devoted his life to promoting is especially fitting.

"An American Place was there for anyone to come to; Stieglitz took nothing from it, it took everything from him. He told other artists what their work meant to him to their gain if they were big enough to accept the truth of his sincereopinion. He believed that art was one way of saying the essential things about life-what an individual feels about the world and his relationship to it and to his fellow human beings."

The Addison Gallery has an incomplete provenance record for this object. If you have any information, please contact the museum in writing at: