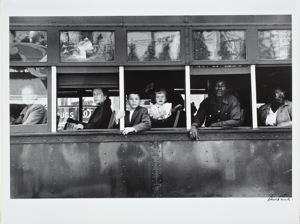 Robert Frank's The Americans, published in the United States in 1959,1 has been hailed as one of the most important and influential photography books of the twentieth century. In 1989, thirty years after its initial publication, the Addison Gallery acquired all of the eighty-three photographs that appear in the book, making it at the time one of only two museums in this country to own a complete set of these compelling images.2

Frank immigrated to the United States from Zurich in 1947 at the age of twenty-two because, as he said, "How can one be Swiss?â3 He thought himself fortunate at the time, having left behind the mess of postwar Europe and his middle-class Jewish family's pressures on him to become part of his father's business. Before coming to America, Frank had apprenticed under commercial photographers in Zurich and Basel, and on his arrival in New York he was encouraged by the influential art director Alexey Brodovitch, who gave him work at Harper's Bazaar and opened doors for him at other magazines, such as Look, Life, and Fortune. Frank chafed under the restrictions of magazine work, however, and complained of having to do "those goddamned picture stories with their beginnings and ends.â4

In 1955, with the help of his friend Walker Evans, Frank became the first non-American to be granted a Guggenheim Fellowship in photography.5 His plan was to travel across the country taking pictures, as he had on earlier trips in Europe and South America, not as a social reformer, but in order to chronicle a cross-section of society. Frank stated that since his goal was "to produce an authentic contemporary document, the visual impact should be such as will nullify explanation.â6 Not yet comfortable with the language and a naturally reticent person, Frank was an outsider looking inâa foreigner trying to come to grips with a new country and his contradictory feelings toward it. He was fascinated by America's banal and everyday aspects, and wrote in his Guggenheim application that he hoped to document "the things that are there, anywhere and everywhereâeasily found, not easily selected and interpretedâ¦ a town at night, a parking lot, a supermarket, a highway ... advertising, neon lights, the faces of the leaders and the faces of the followers, gas tanks and post offices and backyards.â7 During 1955 and 1956 he drove thousands of miles, crisscrossing the country and taking nearly seven hundred rolls of film with his 35mm Leica. As one observer noted, "not since the western movement had a photographer made such an indepth attempt to photograph America on his own without assignment.â8

For a book that would later be described as "the most influential vision in American photography,â9 and "the most important single effort in photography in this century,â10 The Americans was initially not well received. Frank was faulted for his subjective response to the people and places that he recorded, but felt he could not be indifferent, even when his often brutally direct images were interpreted as blatant criticism.11 His detractors were offended by Frank's exploitation of the wide-angle lens and grainy, high-speed film, and outraged by his "anti-technique," with its underlit, blurred forms, tilting horizons, and strangely cropped figures. Frank's camera allowed him to capture on film the "hidden violence" that he perceived in the U.S. during the McCarthy era,12 but the American public was alarmed at seeing itself portrayed in this less than flattering manner. In a letter to his parents in Switzerland, during the Guggenheim project, he wrote: "I am working very hard not just to photograph, but to give an opinion in my photos of America ... America is an interesting country, but there is a lot here that I do not like and that I would never accept. I am also trying to show this in my photos.â13

For all its controversial reception in 1959, The Americans has a surprisingly formal layout, with only one image per page spread, very much like Walker Evans's American Photographs of 1939, a publication which was certainly a guide for Frank in the design of his own book. The photographs to be included in The Americans were carefully edited, selected, and sequenced by Frank over a period of about nine months during 1956 and 1957.14 The book begins with a short introduction by Frank's friend, the Beat writer Jack Kerouac, in which he claims, "Anybody doesnt like these pitchers dont like potry, see?â15 Each of the black-and-white images is accompanied by a brief caption identifying its subject and the city or town where it was taken. Within the book they are roughly divided into sections whose markers are the recurring images of such identifiable American symbols as the flag, the automobile, and the ubiquitous jukebox.16 The photographs, however, read as one continuous progression, mixing images of people and landscapes in much the same way that one senses Frank would have seen them in his travels. They are not arranged chronologically or in any but the most subjective of orders; nevertheless, as each page is turned, they give the viewer an unavoidable sense of making a journey.

Frank singled out the Trolley, New Orleans (1955) (illustrated above) to appear on the cover of The Americans. As an image it expresses, perhaps better than any other in the book, the photographer's sympathy for the downtrodden and the disenfranchised. This picture of a segregated trolley, with its black riders in the back and whites in the front, seemingly imprisoned behind the "bars" of the windows, reveals the blatant inequalities that were still such a part of life in the South at the time. Although other photographs in The Americans feature powerful and political figures, Frank's heart seems to have always been with the alienated and the poor. The mournful expression on the face of the black man, who is framed like a saint in a Renaissance altarpiece, draws the viewer in and conjures up Kerouac's vivid description of the photographer: "Robert Frank, Swiss, unobtrusive, nice, with that little camera that he raises and snaps with one hand, he sucked a sad poem right out of America onto film.â17


1. It was first published the previous year in Paris by Robert Delpire, as Les AmÃ©ricains, with text selected and edited by Alain Bosquet.

2. At the time of the Addison acquisition, the only other complete set of The Americans photographs was in the collection of the The Museum of Fine Arts, Houston, while subsequently The Museum of Contemporary Art, Los Angeles also acquired a complete set. Frank added an additional image to the series in 1978; the Addison's collection includes this photograph, although it did not appear in the original edition. The Addison owns 105 Frank photographs in all, as well as first editions of Les AmÃ©ricains (1958) and The Lines of My Hand (1972).

11. For example, contemporary critic Les Barry claimed that it was "only logical to conclude that this book is an attack on the United States," while a critic for the San Francisco Chronicle called Frank's photographs "neurotic" and "dishonest"; quoted in Jonathan Green, American Photography: A Critical History, 1945 to the Present (New York: Harry N. Abrams, 1984), p. 85.

16. John Szarkowski suggested that these subjects comprised "a new iconography" in American photography in his Looking at Photographs (New York: The Museum of Modern Art, 1973), p. 173.

Your current search criteria is: Object is "Trolley, New Orleans".