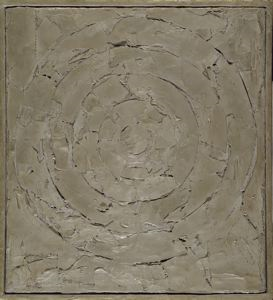 In the early years of his career, Jasper Johns challenged the reigning aesthetic of Abstract Expressionism by reintroducing recognizable subject matter into his paintings and drawings. <i>Target</i> of 1958 was produced the year that Johns had his first solo exhibition.<sup>1</sup> At this time, Johns, along with his friend and colleague Robert Rauschenberg, initiated a turn toward everyday imagery that culminated in the Pop art of the 1960s. The targets, American flags, numbers, and letters that Johns portrayed were recognized as familiar, even commonplace or banal, but his handling of them was subtle and attentive. Johns activated a tension between the demands of abstraction and figuration by suggesting known images without providing any explanatory context in which they could be read. In this way, he reinserted subject matter into painting but left meaning indeterminate.

The tension that Johns produced between abstraction and figuration is particularly evident in such monochromatic works as the Addisonâs <i>Target</i>. Here, Johns indicated the concentric rings of a target through surface modulation rather than by the expected color scheme of red and white. He therefore depended on the viewerâs ability to recognize the subject even while he denied the distinction between figure and ground. Beginning with a collaged paper matrix, he built layers of brushy texture with Sculpmetal, a model-maker's medium of aluminum powder suspended in a plastic or lacquer base. Sculpmetal became a signature material for Johns, who has used it in two- and three-dimensional works to heighten and intensify the handmade qualities of otherwise standardized or ready-made subjects.

Johns often pursued the three-dimensional qualities of his Sculpmetal works in bronze casts. In 1960 he produced <i>Flag</i>, a collage-and-Sculpmetal work formerly in Rauschenbergâs collection which is closely related to the Addisonâs <i>Target</i>. Both works translate a flat object with a standardized color-scheme into a monochromatic work with a sculptural presence. <i>Flag</i> was later cast in bronze. As a sculpture, it reiterated Johnsâs interest in representing things usually recognized for their surface pattern as solid objects in space. The artist Frank Stella, former owner of the Addisonâs <i>Target</i>, has suggested that it too was intended as a prototype for a bronze, although none has been produced to date.<sup>2</sup> An undated note in one of Johnsâs scrapbooks records his intention to produce such a work: âSculpt a folded flag and a stool. Make a target in bronze so that the circles can be turned to any relationship.â<sup>3</sup> This remark indicates that Johns had a particular interest in the physical and conceptual properties of the target. In his public statements, however, he has denied any such interest and claimed that he chose images because they were convenient.<sup>4</sup>

Johnsâs subjects, he explained, provided a set of parameters in which he could explore other concerns: âUsing the design of the American flag took care of a great deal for me because I didnât have to design it. So I went on to similar things like the targetsâthings the mind already knows. That gave me room to work on other levels.â<sup>5</sup> Johns further stated that the targets and flags interested him because they were at once overlooked and familiar: âTheyâre both things which are seen and not looked at, not examined, and they both have clearly defined areas which could be measured and transferred to canvas.â<sup>6</sup> These often-quoted statements suggest that Johns used his arbitrary subjects for formal explorations. However, his insistence on depicting familiar things in itself threatened the very tenets of modernism that were prevalent at the time.

Johnsâs return to a figurative idiom removed him from the plane of pure abstraction and demanded that his works be read in more complex ways. As art historian Leo Steinberg has argued, Johns carefully crafted representations of uninteresting things in a way that undermined the perceived sincerity of the splashy brushstrokes and emotive styles of the Abstract Expressionists.<sup>7</sup> <i>Target</i> veils its subject through sumptuous surface markings and a monochrome medium and tells nothing of the artistâs interest in the target or his reason for attending to its form. By denying the significance of his subjects, therefore, Johns rejected the connotations of personal expression that had become the status quo in modern art. Instead, Johns aimed his viewersâ attention toward the very process of perception.

Your current search criteria is: Object is "Target".