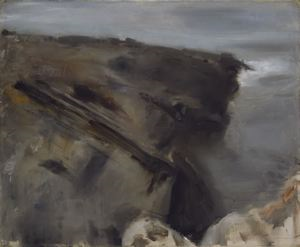 Rock of Port Issol, West Side

Edwin Dickinson liked to say that he was "a general painter in oil." This he was. No subject, whether composed from imagination or rendered from nature, was beyond his interest. But certain themes are more characteristic of his oeuvre than others, and Rock of Port Issol, West Side is highly representative of his lifelong interest in the junctions of coast and sea. Dickinson nearly always lived near some body of water, and the only home he ever owned stood but a few feet from a large cove off Wellfleet Harbor on Cape Cod.

Beginning in 1937, Dickinson, with his wife, Frances (Pat), and their children, Helen and Constant, spent nine months in France. From 26 December 1937 until 30 May 1938 they settled near Toulon in Sanary-sur-Mer, a fishing village on the Mediterranean. Within walking distance was a promontory called the Rock of Port Issol. Dickinson loved to walk and ranged widely around Sanary for his subjects. The substantial promontory quickly drew his attention, and on 22 January 1938 he painted his first rendering of it, the Addison's Rock of Port Issol, West Side. It was a natural subject, for Dickinson had a passion not only for coasts but also for rocks and cliffs. He painted the coast often that winter and the Rock of Port Issol four times.1

The Addison's Rock of Port Issol was a favorite of Dickinson's, one of those paintings which he said was a "good one," always adding, "for me." The disclaimer was characteristic. He felt he knew his place in the world of artists, both past and present. He never referred to any living artist with disparagement, but he would say he knew who his "betters" were and they were a select group.

Dickinson loved to paint out of doors, and like nearly all his French paintings of 1938, Rock of Port Issol, West Side is a premier coup, meaning that it was executed in a single session or "sitting," as he liked to call it. A sitting lasted two to three hours and then a premier coup picture was not touched again. Artists are often thought to have painted in the South of France to capture its special atmospheric light, but there is no sense that this work is "bathed" in the famous light of the Mediterranean. The rock is defined by its own vigorous form with the sea churning at its tip, and by great richness of color. Dickinson maintained that he painted what he saw; for him the rock's surfaces and shadows were coloristically rich with the lavenders, reds, and oranges of this painting.

The rock itself dominates the composition. This is not an expansive landscape or sea view, but one which isolates the great promontory. Its inner character, so to speak, is shown from a certain spot, identified in the title as its west side. The other paintings of it are quite different. Yet although this is a kind of "portrait" of a specific natural site, it also surpasses its particulars. Writing of this piece, art historian Mitchell Kahan has noted that Dickinson "captures not so much a physical sensation but a psychic one."2

Dickinson rarely painted seascapes. More frequently he depicted the intersections, the junctions of land and sea, in such a way that the chosen features of a scene become more striking than they may appear in nature. "Extracted" from its particular geography, singled out from its coastline, this projection into the Mediterranean conveys no sense of narrative or of any human event. The vigorous slashes of paint in the near foreground contribute to the work's compelling life and vigor. Attention is fully focused on the commanding presence of the painting.


1. The other paintings are Rock of Port Issol (The Detroit Institute of Arts), Rock of Port Issol, East Side (National Museum of American Art, Washington, D.C.), and Rocks and Water, Port lssol (private collection).