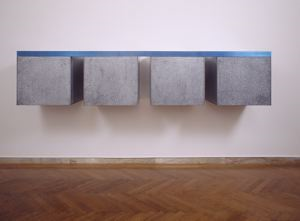 In 1960, Donald Judd was a painter in search of more effective means. By 1962 he had progressed to painted reliefs, and three years later he was becoming famous for three-dimensional works fabricated in industrial materials such as galvanized iron, aluminum, and Plexiglas. These he declined to call sculpture, preferring his own term, âspecific objects.â

Judd was not alone. Other young painters, including Dan Flavin, John Chamberlain, and Claes Oldenburg, had been inspired by the scale, unity, and saturated colors of the Abstract Expressionists, but felt constrained by painting. During the late 1950s and early 1960s, they all gradually abandoned two dimensions for âreal space, real materialsâ (Juddâs words again), neatly bypassing the dead weight of sculptural convention.

This transition is as important as the Abstract Expressionistsâ evolution from Cubist- and Surrealist-flavored easel painting to boldly composed mural-sized canvases. Its assertion of real space as one of art's central components has been fundamental to the environmental and installation art of the past thirty years.

The sculpture in the collection of the Addison Gallery is among the earliest signs that Juddâs journey into three dimensions was complete. It introduces a configuration central to his oeuvre: the horizontal row of repeating cubes, an arrangement that he would expand upon until the end of his life.

One of the first objects fabricated by Bernstein Brothers, the Long Island City metalworking firm that produced Judd sculptures for many years, the piece reflects his dawning consciousness of the possibilities of industrial metals and paints. It is relatively subdued, even chaste, compared to the fierce red-painted wood pieces in Juddâs historic solo show at the Green Gallery in 1964.

Still, the piece exemplifies many of Juddâs most dearly held aesthetic principles. Its thin, tensile nonart materials add no extra visual weight, hence no suggestion of ponderous meaning. Its static forms are more architectural than anthropomorphic; they do not imply the figure by animating space, they simply measure space and divide it. The workâs color and structure are at once straightforward and quirky, adding up to an intriguing mixture of brain and rather seductive, almost delicate brawn. The 2 1/2-inch-square horizontal tube spray-painted Harley-Davidson blue that connects the boxes along their upper comers serves a purely visual function: it unites the boxes and its bright artificial color plays off the intrinsic color of the galvanized iron. The simple arrangement of four equal units eschews traditional compositional principles, which Judd associated with older artâand with social hierarchy. He saw his composition as âlocal order, just an arrangement, barely order at all.â1

The Addison piece developed in an organic manner especially characteristic of Judd, who accurately called himself an empiricist. Throughout his evolution, one senses this empirical process constantly at work, in his habit of studying a piece or its constituent parts until other ideas, uses, and structures suggested themselves.

In 1963 and 1964 Judd cultivated a 2 1/2-inch-square aluminum tube, creating a number of spare, linear wall pieces in which increasingly assertive elements extended below its horizontal span. At the same time many of Judd's drawings explore the idea of floor pieces using repeating geometric forms, some of them oddly gawky. Finally, a 1964 drawing shows him bringing the two lines of inquiry together. It depicts a row of four closely spaced cubes, its upper edge delineated by a continuous tube. The projected work is identical to the 1965 Addison piece: the drawing even indicates that the tube would be blue.

As suggested by this drawingâs seen-from-below viewpoint, the Addison piece was intended to hang on the wall, where its bulky volumes rendered the term âwall reliefâ obsolete. Proceeding in his usual empirical manner, Judd was off and running. Within two years he would place an identical configuration on the floor, and would also eliminate the connecting tube from subsequent rows of boxes. In addition, he would enlarge the dimensions of the cubes from thirty inches on a side to as much as forty-eight inches and open up the cubes by making their sides in Plexiglas, so that the entire piece became, seen from either end, a large segmented tube.

Completed by Bernstein Brothers on December 15, 1965, the Addison piece is the third example of a work first fabricated in late 1964. Judd traded it with Frank Stella, whose art he greatly admired, receiving in exchange a painting from Stellaâs Dartmouth series of 1962-64 titled Valparaiso Green. At the time the two artists were widely seen as the leading proponents of Minimalism, and the very phrase âStella and Juddâ rang with fashionable authority. (As âSalle and Schnabelâ did in the mid-1980s and âJohns and Rauschenbergâ still do, after more than forty years.) Ultimately Stella and Judd went very different ways as artists. The Addison piece marks the moment of their personal and stylistic intersection, in addition to being among the handful of early fabricated pieces that initiated Donald Judd's mature style.