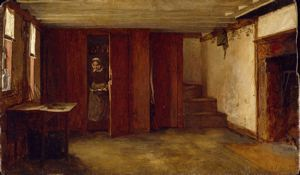 Primarily associated with anecdotal paintings of American life, Eastman Johnson was also proficient in the creation of insightful portraits of prominent citizens. His art bridged the contrasting currents in nineteenth-century American culture of sentimentalism and realism, while incorporating a stylistic sophistication acquired from extensive study in DÃ¼sseldorf, Holland, and Paris.

In 1856, when the Philanthropic Literary Society of the University of North Carolina at Chapel Hill commissioned an oil portrait of alumnus James Cochran Dobbin (1814-1857), Secretary of the Navy,1 Johnson first rendered Dobbinâs likeness in a preparatory charcoal drawing. Although as a young artist he had completed a portfolio of crayon portraits of important political and literary figures, this study exhibits the technical virtuosity and artistic maturity derived from his training abroad; in particular, its dramatic chiaroscuro and painterly modeling reflect the influence of Rembrandt, whose work Johnson had studied in The Hague.2 Soon after finishing this masterful drawing, in which he sensitively captured the character of his sitter, and the oil painting of Dobbin (still in the collection of the University of North Carolina) Johnson turned away from portraiture to fulfill the growing demand at midcentury for scenes of American rural activity.

The 1870s, which were his most productive period of genre painting, coincided with Johnson's purchase of a summer house on Nantucket Island. His association with Nantucket was such that a contemporary writer stated, âthe man and the island have a natural sympathy for each other. He is a chronicler of a phase of our national life which is fast passing away.â3 Once a prosperous whaling community, Nantucket had, out of economic necessity, become something of a tourist resort, exhibiting a quaint, preindustrial charm. Johnsonâs nostalgic depictions of life on the island represent his response to the encroachment of urbanization in late nineteenth-century America.

A small, sepia-toned painting of 1875, Susan Ray's KitchenâNantucket was one of many rustic interiors by Johnson that evoke a simpler time. Like the popular âNew England Kitchenâ exhibit, on view at the Centennial celebration in Philadelphia the following year, this sparsely furnished room, with its oil lantern, gateleg table, and Windsor chair, alluded to the nationâs colonial past. In the nineteenth century, the brick hearth, although not the central focus here, connoted the moral and spiritual comfort of the family home. Johnson also painted The Other Side of Susan Rayâs Kitchen (c. 1875); the two works may have been intended for use in future compositions.4

Marking the culmination of his outdoor genre paintings, The Cranberry Harvest (1880, Timken Museum of Art, San Diego) is a joyful celebration of a particularly American agrarian occupation. By focusing in this work on compositional arrangements and patterns of light, Johnson shifted from narrative to aesthetic concerns. He executed nearly twenty studies in preparation for the final canvas, and of these the Addison Gallery has several important examples. The Conversation and Woman on a Hill (1870), depict women who have taken a break from cranberry picking. While the motif of barrels and conversational groups is found in Johnsonâs previous maple-sugaring pictures, the lighter palette of pinks and blues seen in The Conversation demonstrates his new aesthetic.5 Both paintings were considered âfinished sketches,â a term Johnson used to refer to studies of specific activity as opposed to panoramic views.6 Employing the painting techniques that he had learned while a student in the Paris atelier of Thomas Couture, Johnson seems also to have followed Coutureâs method of picture construction, with its emphasis on the Ã©bauche, or oil study, as well as his dictum to paint local life.

Aware of Nantucket's pastoral appeal, Johnson painted The Cranberry Harvest at a time when pictures of European peasants were at the height of their popularity among American collectors. Contemporary critics commented on the stylistic affinities between Johnsonâs work and that of the Frenchman Jules Breton (1807-1906), who specialized in scenes of rustic life. Viewers also appreciated Johnsonâs depictions as a reminder of Americaâs democratic agrarian heritage, compared with realist images of the downtrodden European laboring class.7 Scholars differ as to whether the nostalgia inherent in The Cranberry Harvest was meant by Johnson as a positive statement in favor of Nantucket as a summer resort or indicates rather his desire to ignore poverty and urban realities.8

While today we appreciate the realism of the Dobbin charcoal portrait and the informal brushwork of the Nantucket studies, Johnson never intended these pictures to be exhibited as independent works of art. During the post-Civil War period, rapid industrialization and urbanization fueled the market for paintings that reinforced the national ethos which, along with the technical sophistication of his work, assured Johnson's popularity.


1. When Dobbin, appointed Secretary of the Navy in 1853, authorized new steam-powered frigates to modernize the fleet, he worked with Johnsonâs father, chief clerk in the Naval Bureau of Construction since 1846. Dobbin graduated from the University of North Carolina in 1832.

2. This drawing also provides visual evidence that while at the DÃ¼sseldorf Academy, Johnson may have been influenced by Edward J. F. Bendermann, who used charcoal in a fluid manner to create expressive, bust-length portraits; see Theodore E. Stebbins, Jr., American Master Drawings and Watercolors: A History of Works on Paper from Colonial Times to the Present (New York: Harper & Row, 1976), p. 185.

5. The color, recently rediscovered through conservation efforts, has caused Sally Mills to suggest that it may have been painted sometime later than the majority of preparatory works for The Cranberry Harvest. Mills noted, however, the similarity of treatment in this and other studies with the focus on âhard, form-sculpting light.â See Sally Mills, âRight Feeling and Sound Technique: French Art and the Development of Eastman Johnsonâs Genre Paintings,â in Eastman Johnson, The Cranberry Harvest, Island of Nantucket: Twenty-fifth Anniversary Exhibition (San Diego: Timken Art Gallery, 1990), p. 61.

Your current search criteria is: Object is "Susan Ray's KitchenâNantucket".