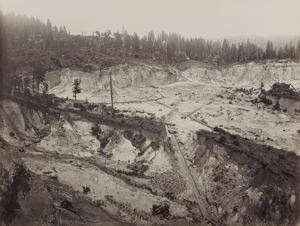 Though best known as a photographer of unspoiled Western landscapes, especially in the Yosemite area, Carleton E. Watkins also photographed industrial scenes, such as the North Bloomfield Gravel Mines in Nevada County, California. These photographs are generally ignored by most histories of the medium, in part because they complicate the prevailing vision of Watkins as a landscape photographer.1 However, by photographing nature and industry, Watkins enacted this classic nineteenth-century American dichotomy only to resolve it by presenting both as landscapes of harmony and order, united by aesthetic as well as economic concerns2.

Watkins's impetus to photograph Yosemite was initially financial. Like most nineteenth-century photographers, he was a commercial photographer who depended on sales and commissions for his livelihood. After witnessing the success of local competitor Charles Weed's Yosemite photographs, he decided to best Weed with the first large-format, or mammoth-plate, images of the region. Accordingly, he photographed the area in 1861, and then again as part of the California State Geological Survey in 1865 and 1866. From negatives taken during the 1865-66 Survey trip he created the album Yo-Semite Valley: Photographic Views of the Falls and Valley of Yo-Semite in Mariposa County, California. This large-format album was designed to showcase Watkins's skill as an artistic photographer3 and also to appeal to the growing number of tourists to the California, and specifically the Yosemite, region.4

The fifty-one albumen prints contained in the album are arranged to mimic a tour of the Yosemite Valley. The initial images orient the viewer to the experience to come: a topographical
map gives an overview of the valley, and the first picture is entitled, appropriately enough, The First View of the Valley From Mariposa Trail. The album gradually moves through a typical tourist itinerary, focusing on both general vistas and more specific views of such popular attractions as Bridal Veil Falls, El Capitan, Half Dome, and others. Though depicting a virtual wilderness, the images in this album are remarkably ordered, calm, and classical. Still, serene views emphasize the clear waters, majestic rock formations, and wide vistas. Though this was in part a function of the long exposure times typical of the wet-collodion process, and in part a function of Watkins's own aesthetic sensibility, it was also designed both to attract potential tourists (and their dollars) to the natural beauties of the region and to reassure them of the safety of such an excursion.

While Watkins created the Yosemite album for general sale from his San Francisco studio, he also relied financially on commissions from businessmen, real-estate speculators, and industrialists. Indeed, his professional career is framed between two mining commissions, from the Guadaloupe Quicksilver Mine in 1858 to the Golden Gate/Golden Feather Mining Co. in 1891.5 Like the rail companies, which commissioned photographers both to document and to promote the newly completed railroads, mining interests were quick to recognize the value of photography as an advertising tool. No doubt based on the strength of his previous mining commissions, in 1871 the North Bloomfield Gravel Mines in Nevada County engaged Watkins to take photographs designed to attract foreign investors6.

As he did in Yosemite, Watkins composed these views to showcase the mine's appeal.7 Though the terrain was different, the challenge was the same. Again using the mammoth-plate camera, Watkins photographed from a distance sufficient to encompass the scope of the hydraulic mining operations. Two images from the same series layout the central concerns. In the first, we see a landscape of productivity and work. The intricate web of pumps and tubing ensures the efficiency of the business, and demonstrates the technical acumen of the mine's operators. The long waterway that nearly bisects the scene directs the eye to the heart of the matter: hydraulic mining, or the high-power spraying of water against a hillside to dislodge and pulverize rock. The second view offers a vision of the transformative powers of this process. Nestled in this hydraulically created valley, a community has sprung up, promising not only to tame the region, but also to ensure the stability vital for continued success.8

While these two sets of photographs may appear antithetical, they are part of the same overriding concern. The apparent contradictions of nature and industry are reconciled in views that frame and order both as landscapes of balance, order, and progress. Watkins achieves this aesthetically by the use of similar formal devices, such as focusing on distant "waterfalls" (one made by the hydraulic process) to center and anchor the composition in both [Mining View, Nevada County] and The Yosemite Falls 2630 Ft. From Camp Grove (plate 40 of the Yosemite Valley album). Aesthetic parallels, in turn, suggest economic ones; both types of image highlight opportunities in the relatively new fields of mining and tourism. Taken together, these views present a seamless blend of wilderness and civilization, nature and industry, art and profit.


1. This generally occurs when Watkins is placed within a high-art context, and thus becomes a photographer of landscapes as opposed to views. For examples of this, see Weston J. Naef, Era of Exploration: The Rise of Landscape Photography in the American West, 1860-1885 (Buffalo and New York: Albright-Knox Art Gallery and The Metropolitan Museum of Art, 1975) and Estelle Jussim and Elizabeth Lindquist-Cock, Landscape as Photograph (New Haven, Connecticut: Yale University Press, 1985). For a critique of this type of photo-history, see Rosalind Krauss, "Photography's Discursive Spaces: Landscape/View," Art Joumal 42 (Winter 1983), pp. 311-19.

2. Leo Marx was the first to define this trend in American cultural productions in The Machine in the Garden (New York: Oxford University Press, 1964).

3. Watkins consistently pursued artistic as well as commercial success. At the height of his career, he achieved a significant measure of the former through local, national, and international awards, as well as glowing praise in such national journals as Atlantic Monthly and Philadelphia Photographer. See Peter Palmquist, Carleton E. Watkins, Photographer of the American West (Albuquerque: University of New Mexico Press, for the Amon Carter Museum, 1983), pp. 199-200.

5. George Dimock makes much of this point, comparing Watkins's career to that of a mining prospector constantly seeking his fortune in the California countryside. See Dimock, Exploiting the View: Photographs of Yosemite & Mariposa (North Bennington, Vermont: Park-McCullough House, 1984), p. 23.

7. As testament to the aesthetic and technical success of these views, the 1871 edition of Mining and Scientific Press proclaimed these works "masterpieces," since they presented "the most perfect and life-like representations of hydraulic mining which we have ever seen depicted on paper." "Photographic Mining Views," Mining and Scientific Press 4 (November 1871), p. 281; quoted in ibid., p. 46.

8. Of course, the reality could be different: for every successful settlement that sprang up in a mining community, another one failed. For a general overview of Western mining operations and their effect on the land, see Patricia Limerick, The Legacy of Conquest: The Unbroken Past of the American West (New York: W. W. Norton & Company, 1987).