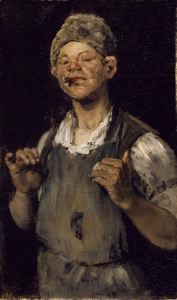 In 1872, under the patronage of several Saint Louis businessmen, William Merritt Chase traveled to Munich to enroll in classes at the KÃ¶nigliche Akademie der Kunste (Royal Academy of Arts). Explaining his choice of the Bavarian city rather than Paris, which was favored by most American art students of the period, Chase boldly proclaimed: "I went to Munich instead of Paris because I could saw wood in Munich, instead of frittering in the Latin merry-go-round.â1 In short, he preferred the bold, direct approach to painting championed by Munich painters over the fastidious drawing methods practiced at the Ãcole des Beaux-Arts in Paris. Since he spoke no German, it was natural for Chase to gravitate to the other American students at the Munich academy, among them Walter Shirlaw and Frank Duveneck; through their close association, the three became popularly known as "the Father, Son, and Holy Ghost.â2 Duveneck, the most established and respected of the three, was the leader of the group and had a profound influence on Chase's artistic development.

By the time of Chase's arrival, Duveneck had begun what would become a series of paintings of German youths, the earliest being his Whistling Boy (1872, Cincinnati Art Museum, Ohio). This painting served as the prototype for those to follow, done both by Duveneck and by several of the other American art students, including Chase. In these works the painters candidly portrayed local apprentice boys engaged in idle pursuits, whistling a tune, or more often smoking a cigarette or a cigarâpresumably out of sight of their employers. Particularly engaging, the paintings aptly capture the rebellious nature of adolescence, showing the boys as they challenge authority and assume what they perceive to be the posture and attributes of manhood.

In 1878, shortly before returning to America, Chase submitted two of his paintings in this genre, The Wounded Poacher (1878, Virginia Museum of Fine Arts) and Apprentice (1875, Wadsworth Atheneum, Hartford, Connecticut), to the inaugural exhibition of the Society of American Artists in New York City. Commenting on Apprentice, the astute art critic Mariana Griswold Van Rensselaer favorably contrasted its "intense, if unbeautiful reality" with "the smooth nothingness, the sickly conventionality of the portrait studies to which our public had been most accustomed.â3 Although Van Rensselaer herself was admittedly somewhat unnerved by the startlingly realistic treatment of Chase's painting, she preferred its boldness to the highly polished and vapid renderings endorsed by the art establishment and favored by New York's social elite.

Despite its relatively unrefined subject matter, however, Chase's Apprentice looks reserved when compared to The Leader. In the other "apprentice paintings," Chase and his colleagues clearly portrayed working-class youths, easily identifiable as such by their clothing and the objects related to their trades, which were often included in the compositions. Although impish, the boys are usually depicted as rather neatly dressed and relatively clean. There is always an underlying innocence evident. In contrast, The Leader presents a very different image: the local bully, with an arrogant expression, cigar clamped in his mouth and the thumbs of his filthy hands hooked into his overalls, asserting his status. The painting's earliest-known title, Impudence, clearly conveys the brash, rude character of Chase's subject, as he squarely confronts the viewer. The effect is immediate and powerful, bordering on the intimidating, but alleviated by Chase's cunning wit as he shows the model with a glint in his eyes, a self-confident grin on his face, his head held unabashedly high. As in nearly all of Chase's paintings, there is a certain dignity conveyed, elevating the simplest subject to a higher plane by means of his art. This is what Chase revered in the work of VelÃ¡zquez, and what he so effectively sought to achieve in his own.

Unlike similar subjects pictured by John George Brown (who specialized in painting New York City street urchins), Chase's works had no message; there was no moral lesson to be learned, no sentimental story to be told. In fact, Chase deplored narrative painting. Instead, he used his subjects to display his own technical virtuosityâhis masterful brushwork and consummate skill in capturing various textures and effects of light. Chase's paintings were first and foremost works of art; subject was secondaryâbut by no means disregarded. He professed: "when the outside is rightly seen, the thing that lies under the surface will be found on your canvas.â4 This was an extension of the philosophy of Willem Leibl, a German artist whom Chase greatly admired, who similarly stated: "if a picture is painted well, the soul would anyway be present."5 The Leader is a clear example of this approach. The youth's physical strength is revealed in Chase's bold treatment of his model's dirt-encrusted hands and bandaged finger (emphasized by strong light), and the boy's tough personality is conveyed in the broadly modeled planes of his face. Furthermore, this is no mere "type" of personâno stereotypical image but rather a distinct individual, one who would be recognized if encountered on a street in Munich. Chase's artistic goal as a realist painter has here been deftly accomplished.

Your current search criteria is: Exhibition is "A Loan Exhibition of 19th Century Paintings from the Addison Gallery of American".