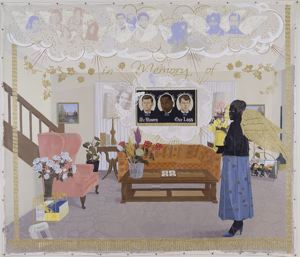 
Medium and Support: Acrylic, collage, and glitter on unstretched canvas banner
Credit Line: Purchased as the gift of the Addison Advisory Council in honor of John ("Jock") M. Reynolds's directorship of the Addison Gallery of American Art, 1989-1998
Accession Number: 1998.160

While Kerry James Marshall developed a radically different visual vocabulary for his 1997-98 series, Souvenir, he also maintained some of his trademark techniques, such as impulsive accent brushstrokes and methodical layering of forms inspired by the aesthetics of illustration. Set in the living room of the artistâs great-auntâs sister and her husband, Bertha Mae and Clifford Clark, this scene prominently features the element that unifies the entire series: the group of three portraits of President John F. Kennedy, Dr. Martin Luther King, Jr., and Senator Robert F. Kennedy. Almost hagiographic in their function, the commemorative portraits of âThe Holy Trinity of the Civil Rights Movementâ would have been typically encountered in the homes of most working-class African-American homes of the late 1960s and early 1970s. Inserted into the realistic framework of this domestic environment are the angelically winged heads of lesser-known figures of the civil-rights and black-liberation struggle, which hover above the head of the stately homemaker as she surveys the prized possessions of her domain.