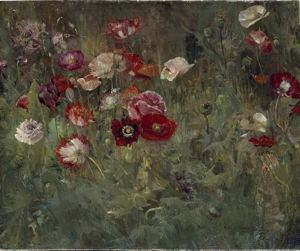 A Bed of Poppies

In 1885 Maria Oakey Dewing and her husband, the painter Thomas Wilmer Dewing, spent the first of eighteen summers in the artists' colony of Cornish, New Hampshire, at the base of Mount Ascutney. There they found themselves caught up in the gardening craze that had taken hold of the rural community, inspiring a contemporary landscape architect to describe Cornish as the site of a "renaissance of gardening in America."1 Among the summer residents, the Dewings had one of the most extensive gardens, modeled, like those of most of their neighbors, on the English-style cottage gardens that were then enjoying a popular revival. Abundantly planted and informally laid out, the Dewings' flower beds were filled with old-fashioned blooms, such as hollyhocks, roses, lilies, irises, foxgloves, peonies, and poppies. During their years in Cornish, Maria developed into an avid amateur botanist and plein air painter, and came to believe that any artist wishing to paint from nature must first commit himself to "a long apprenticeship in the garden.â2 She prided herself on her careful observation of plants and her ability to capture their individual growing habits, claiming: "When I paint flowers, I paint more than I see. I paint what I know is there. For example, I know how the poppy bursts its calyx, so that when I paint poppies they are true to nature.â3

Maria Oakey Dewing's reputation as an artist is based on only a handful of surviving works, nearly all of them flower studies such as this oneâa genre deemed particularly appropriate for women artists at the turn of the century. Her teachers included John La Farge, to whom she acknowledged "an unpayable debt,"4 and whose flower paintings she called "the most beautiful in all the world.â5 She also studied briefly with William Morris Hunt in Boston, and in 1876 traveled to France to work under Thomas Couture, who encouraged his pupils to experiment with painting flowers. As a young artist during the decade of the seventies, Maria painted mainly figures and portraits, but she consciously avoided these subjects following her marriage to Dewing in 1881. Her correspondence with art critic Royal Cortissoz alludes to her concern with not placing her own workâat that time better knownâin competition with that of her husband, and although she had exhibited flower paintings as early as the 1870s, by the 1890s they were almost the only type of painting she did.6 The Art Interchange of May 1895 stated that "since her marriage to Thomas W. Dewing [Maria] has aided her husband by painting the flower backgrounds in many of his pictures.â7 In fact, she collaborated on several of his canvases and folding screens, among them Hymen (1886, Cincinnati Art Museum, Ohio), a picture of the goddess of marriage, and The Days (1887, Wadsworth Atheneum, Hartford, Connecticut), a monumental work based on a poem by Ralph Waldo Emerson.

Even though her choice of flower painting seems conservative, the relative daring of Maria Dewing's canvases can be appreciated when one compares A Bed of Poppies with contemporary renderings by Childe Hassam of Celia Thaxter's famous poppy-filled garden on the Isles of Shoals off the coast of New Hampshire. Unlike the more standard treatment adopted by Hassam, complete with foreground, middle ground, and background, Dewing does away with any suggestion of a horizon line and gives the viewer a radically reduced perspective, denying any sense of depth and depicting the dramatic red and white flowers as delicate patterns dancing against the shifting green of the foliage. In light of her novel approach to the subject, it is interesting to note her instructor Couture's directive to "never forget to make yourself into an ant or a bee; [and] plunder everywhere.â8

In 1905 the Dewings escaped the increasingly popular village of Cornish and purchased a large tract of land at Green Hill, New Hampshire, in the White Mountains. The rugged climate and remote setting of their "camp" did not deter Maria from nurturing her "garden thirsty soul,â9 and over the next nine summers she and her husband planted many different hardy perennials on their property. In a 1923 letter to Edwin C. Shaw, then owner of A Bed of Poppies, Maria described the circumstances surrounding its creation in 1909. She explained that although she had regularly painted in her Cornish garden and had even made an earlier study of poppies there (Poppies and Mignonette, Private collection), his painting was notable for being the only one she did during their time at Green Hill.10 When Maria died just four years after her correspondence with Shaw, her longtime friend Royal Cortissoz summed up her special talent: "She knew how to interpret the soul of a flower but her principal aim was to make it a work of art ... save for La Farge we have had no one who could work with flowers the magic that was hers.â11

11. New York Herald Tribune, 18 December 1927, quoted in Martin, "Rediscovery of Maria Oakey Dewing," p. 27. I n a letter of 12 March 1928 to Robert McIntyre at the Macbeth Gallery in New York, itemizing acquisition recommendations for the newly founded Addison Gallery of American Art, Cortissoz writes of Maria Oakey Dewing's paintings: "By all means. If you can get one of her fine flower pieces don't miss the chance. She was as good as LaFarge or Fantin Latour with flowers"; Addison Gallery Archives.