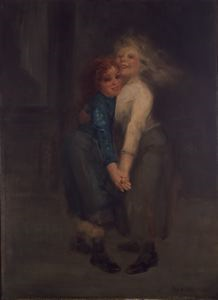 Two years after George Luks painted The Spielers, he wrote confidently to his dealer, William Macbeth, "I want $2000 [for the painting] for I am sure it will fetch that price and probably more later on.â1 While Luks was somewhat optimistic (and unrealistic) in his prediction of what a collector would pay for his workâthe going rate for a modern American painting at the time being somewhere around $500âhe was correct in predicting that it would rise in value and importance. Over the next ten years, The Spielers (from the German spielen, to play), which was also called Dancing Girls or East Side Children Dancing to Hand-Organ Music,2 was repeatedly singled out by critics as one of the finest examples of contemporary art and a symbol of life in the New York slums, where children of all backgrounds came together to play. In reviews of Luks's 1910 one-man exhibition at the Macbeth Gallery, it was described as a "masterpiece" and a "justly famous picture.â3 Probably because of the price that the artist demanded, The Spielers remained unsold even after numerous exhibitions and countless glowing reviews. Luks finally did sell the painting to Archibald B. Gwathmey, a New York broker, around 1914.4 Although it is not recorded whether he got the $2,000 he had anticipated, The Spielers, more than any other work by Luks, made his reputation.

Writing in an article devoted to Luks in the New York Times Magazine on 6 February 1916, critic James Huneker was extravagant in his praise:

The east side is yet to boast its Dickens. And Dickens would have enjoyed the picture of the little tousled Irish girl with her red locks who dances with the pretty flaxen-haired German child, surely a baker's daughter of Avenue B. Now you might suppose that this vivid art, this painting which has caught and retained the primal jolt and rhythm of the sketch, might be necessary rude and unscientific in technique. It is the reverse. This particular picture is full of delicious tonalities. The head of the blonde girl might be from an English eighteenth century masterpiece.5

It was this combination of contemporary subject matter in the tradition of portrayals of the common people by artists such as Pieter Bruegel, William Hogarth, and Jean-FranÃ§ois Millet with the energetic brush technique echoing that of Frans Hals and perhaps even that of Fragonard, that brought Luks's work to prominence. While the photographs of Jacob Riis, the novels of Theodore Dreiser, and countless melodramatic anonymous reports in the newspapers of the day offered a depressing picture of life for the underclass, The Spielers presented a more optimistic view of harmony among children and was viewed as a celebration of American opportunity. In essence, the painting shows slums as Americans wanted to think they were likeâplaces where children wore ragged clothes but were happy and well-fed enough to enjoy playing in the street. "To be a poet of the poor and yet not be sordid is something of an achievement," John Cournos wrote, praising Luks in the International Studio.6 In The Spielers, in particular, there was nothing not to like about the painting. While Luks's other portrayals of slum children, such as The Little Madonna (1907) also in the Addison Gallery collection or The Sand Artist (1905, formerly IBM Corporation), also present them sympathetically, the dancing subjects of The Spielers make it a particularly lively and appealing picture.

Since being acquired by the Addison Gallery in 1931, The Spielers has been lent to over fifty exhibitions at other institutions and requested for countless more. Its popularity reflects not only its merits as a work of art, but also its characterization as a painting of the Ashcan School. Americans have come to think of Luks and other members of Robert Henri's circle as artists with a social conscience because of their act of rebellion in organizing a show outside of the National Academy; in reality, their protest had more to do with the politics of artists' organizations than with any social agenda.

Luks was fascinated, quite simply, with interesting characters, many of whom he found in the New York slums. His paintings of adults have an edge to themâthe faces are grimmer, showing the wear of years of living in less than ideal surroundings. As Luks's fellow artist Everett Shinn noted, had Luks met up with the older sisters of the two girls in this picture, "There would be no illusions.â7 But it was the illusions that made The Spielers popular in its day. And now, while we know that child labor, poor living conditions, and disease made the lives of young immigrant children in the slums less than rosy, we too want to remember, most of all, the good moments when girls would dance together celebrating nothing more particular than being alive.

2. The painting seems to have had three titles, all within the first five years of its existence. In his letter to William Macbeth in 1907 (see n. 1 above), Luks calls the work "Dancing Girls." The title East Side Children Dancing to Hand Organ Music occurs once in John Spargo, "George Luks: An American painter of great originality and force whose art related to all the experience and interests of life," The Craftsman 12 (September 1907), p. 602. In the 1910 one-artist exhibition at the Macbeth Gallery, the work was exhibited as Dancing Girls but discussed by many reviewers under the title The Spielers, which had been used in earlier exhibitions. See reviews of the exhibition in the George Luks Papers, Archives of American Art, microfilm reel NLU 1.

4. The sale of The Spielers may have been a direct transaction between the artist and the collector as there is no record of it in the account books of the Macbeth Gallery, now in the Archives of American Art, or in the records of Kraushaar Galleries, New York, which was also handling Luks's work at the time. I am grateful to Katherine Kaplan of Kraushaar for verifying that the sale was not handled by Kraushaar.

Your current search criteria is: Object is "The Spielers".