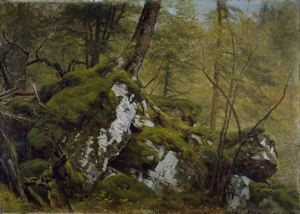 Study of a Wood Interior

In addition to being one of the earliest American outdoor oil sketches, Study of a Wood Interior has special significance to the Addison in that it was the first example of the early Hudson River School to enter the collection.

With the death of Thomas Cole in 1848, Asher B. Durand was recognized as the leader of American landscape painting. It was Cole, in fact, who had encouraged Durand to become a landscape artist. Whereas Cole's landscapes were often ideal allegories always grandiose, Durand's remained true to nature. Art historian Barbara Novak describes the studies that he made from nature in the 1850s as being the âvanguard in realistic observationâ and goes as far as to compare them with similar works by Courbet at this date in France.1

Study of a Wood Interior is representative of the many plein air oil sketches that Durand executed during summers in the Northeast, in locations such as the Catskills, White Mountains, and Adirondacks. Although finished paintings in their own right, these detailed studies were used as models for larger works executed during the winter in the artist's New York studio. The large-scale works, which were highly polished salon pictures done in the grand Hudson River style, lack the immediacy and intimacy evident in Study of a Wood Interior. The coarse brushstrokes and tactile pigment lend a sense of spontaneity to the picture. The close-up view helps to engage the viewer directly. One can almost feel the moist, cool air of the mossy wood. Moreover, the meticulous attention to detail, perhaps a result of Durand's experience as an engraver, speaks of reality.

Durand believed that in addition to revealing the laws of art, the study of minute elements of nature could lead to the understanding of universal truths. In his now famous "Letters on Landscape" he wrote:

There is yet another motive for referring you to the study of Nature earlyâits influence on the mind and heart. The external appearance of this our dwelling place, apart from its wondrous structure and functions that minister to our well-being, is fraught with lessons of high and holy meaning, only surpassed by the light of Revelation.2

Durand's reverence for nature led him to question the wisdom of relying on precedents established by earlier masters, such as Claude Lorraine. Although his larger works retained such Claudian-derived compositional devices as dark foregrounds, framing trees, and distant mountains, in his studies Durand allowed the elements of nature herself to dictate compositional structure. The rocks and trees in Study of a Wood Interior are more than props. Their varying shapes, volumes, and natural placement work together to form a delicately balanced and ordered design. As he explained, a painting âwill be great in proportion as it declares the glory of God by a representation of his works, and not the works of man.â3 Durand cited books and occasional interaction with fellow artists as being all one needed to learn the mechanics of art. "Then let me earnestly recommend to you one STUDIO which you may freely enter, and receive in liberal measure the most sure and safe instruction ever meted to any pupil the STUDIO OF NATURE.â4

Despite Durand's call for the meticulous study of nature, he did not advocate literal transcription. While he advised his pupils to begin by recording exactly what they saw, this was only a preliminary step. The practice would help the young artist to become intimate with nature's infinity, in preparation for the more advanced stage of picking and choosing among her elements in order to create the most effective composition possible. He believed that a mature artist could modify or omit subordinate details whenever they detracted from the beauty of predominate features. Durand's son described his father's creative process:

My fatherâs practice was, while faithfully painting what he saw, not to paint all that he saw. Finding trees in groups, he selected one that seemed to him, in age, colour, or form, to be the most characteristic of its species, or in other words, the most beautiful. In painting its surroundings, he eliminated all shrubs and other trees which interfered with the impression made by this one. Every outdoor study, as well as every pictorial composition, was regarded as a sort of dramatic scene in which a particular tree or aspect of nature may be called the principal figure; other trees, as in the case of a study, being subordinate and relative value in giving the most interesting object strong relief. To him, certain objects and aspects were more beautiful than others, and not so many details to be servilely and indiscriminately imitated.5

This practice of depicting carefully selected parts of nature in order to create a more perfect whole is analogous to Durand's use of the outdoor sketches to create his studio works. Although they are studies, these small oils stand on an equal footing with his large-scale canvases and certainly meet Durand's own requirements: "That is a fine picture which at once takes possession of youâdraws you into itâyou traverse itâbreathe its atmosphereâfeel its sunshine, and you repose in its shade without thinking of its design or execution, effect or color.â6

Your current search criteria is: Exhibition is "Scope in Collecting [25th Anniversary Exhibition]".