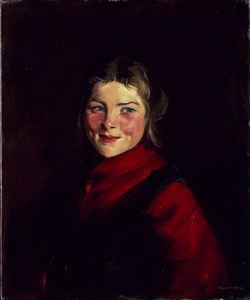 Robert Henri was an influential teacher and successful portraitist, whose belief in individualism and freedom of expression made him a leading figure in early twentieth-century American art. To further artistic freedom, he challenged the conservative policies of the National Academy of Design by organizing the independent exhibition âThe Eightâ at the Macbeth Gallery in New York in 1908. With his own painting, he promoted art for life's sake by depicting human dignity and vitality in portraits that recall the European masters he admired.1

In the summer of 1913, Henri made his first trip to Ireland.2 With his wife, Marjorie Organ, he rented Corrymore House, which was situated two miles up a steep hill outside the fishing village of Dooagh on Achill Island in County Mayo. Mary, one of many canvases of a favorite model, portrays the young Mary OâDonnell, who was the caretaker for the house and surrounding farm. In a letter, Henri's account of Mary emphasized her rural way of life: gathering sea grass, walking miles to milk the cow, wearing homespun cloth made from the wool of her familyâs sheep. Enchanted by the tones of Irish speech and the poetic quality of Irish tales, he wrote: âShe had a voice and a form of english which cant be equalled in the worldâIn my opinion this is true of all these Achill folk. They speak gaelic among themselves but to us they speak english in a voice that is rich strong and caressing.â3

The painting of Mary O'Donnell embodies Henriâs conception of portraiture and the purpose of art. He believed that art should express the artist's emotional and intellectual attitude toward his subject, his own individuality, and the vitality of life.4 In portraits, specifically, his intention was to capture the sitterâs essential being through the visual language of form, color, and gesture. Henri instructed his students, therefore, to âconsider well the featureâs part in relation to the idea you have to express,â noting that âall the features are concerned in one expression which manifests the state of mind or the condition of the sitter.â5 Not to be used for its own sake, pictorial language or technique was meant to indicate what was significant in the subject. In this canvas, a vigorous painting style connotes the life force of Henriâs model. Working quickly to capture her mood, he made Maryâs shining face, above her bright red sweater, so vital that her eyes sparkle and her smiling lips seem about to speak.

Although academically trained at the Pennsylvania Academy of the Fine Arts and in Paris, Henriâs approach to formal concerns reflects his study of realist portrait painters. There are echoes of the work of VelÃ¡zquez and Manet in the strong directional lighting that accentuates Maryâs face against the undefined, dark brown background. Freedom in the application of paint and solidity in the rendering of the head were derived from VelÃ¡zquez and Frans Hals.6

Henriâs summer trips, to Ireland, Spain, Holland, and elsewhere enabled him to fulfill his search for portrait subjects to represent unspoiled humanity. In the rural community on Achill Island, he found the working people whom he believed to be superior to materialistic urbanites. They appealed to him as exemplars of manâs natural, instinctive virtues. For the same reason he liked to paint children, whose innocence he valued more than adult sophistication. Henriâs romantic assumptions, that the young and people who lived closer to nature could serve as an antidote to Western civilization, constituted a form of cultural primitivism based on the writings of Jean-Jacques Rousseau and Ralph Waldo Emerson.7

Two years after completing this painting of Mary OâDonnell, Henri published the article âMy People,â a manifesto of his humanistic philosophy and belief in individualism. Writing during the First World War, he renounced nationalism while emphasizing his optimistic faith in mankind: âThis thing I call dignity in a human being is inevitably the result of an established order in the universeâ¦. Everywhere I find that the moment order in nature is understood and freely shown, the result is nobilityâthe Irish peasant has nobility of language and facial expression.â8 The Armory Show, which occurred the spring before his departure for Ireland, introduced avant-garde European abstraction to a new American audience. While the show was, in part, a result of Henriâs earlier efforts to stage independent exhibitions, it substantially altered the direction of progressive art. Henriâs style, however, remained largely unchanged. The quest for people of different nationalities and ethnic groups through whom he could express his belief in humanity would engage him for the rest of his life. In his late years, Henri purchased Corrymore House and returned there each summer until his death, enriched by his experiences of Ireland and the Irish.


1. For a reconsideration of the significance of portraiture in Henri's oeuvre, see Valerie Ann Leeds, My People: The Portraits of Robert Henri (Orlando, Florida: Orlando Museum of Art, 1994).

2. Bennard Perlman has suggested that although the impetus for Henriâs trip to Ireland could have been the recommendation of Irish journalists Charles Fitzgerald and Frederick James Gregg, or his own and Marjorieâs heritage, it was probably a retreat from the results of the Armory Show. See Perlman, Robert Henri: His Life and Art (New York: Dover Publications, 1991), pp. 110-11.

3. Robert Henri to John T. Spaulding, 28 November 1921, photocopy, Addison Gallery Archives. The version of the painting of Mary owned by Spaulding, now in the collection of the Museum of Fine Arts, Boston, is entitled Irish Girl.