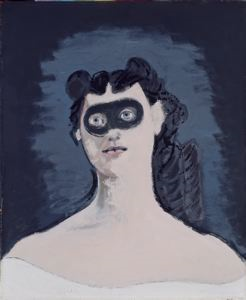 Russian-born John Graham arrived in New York, via Paris, in 1920 and quickly became the influential central figure in a circle of emerging artists that included Stuart Davis, Arshile Gorky, David Smith, Jan Multulka, Willem de Kooning, and even the very young Jackson Pollock. While serving as the conduit for avant-garde European and French ideas and art theory for fellow artists and friends, Graham toiled at his own art-making, first exploring figuration in the twenties and then moving to abstraction in the thirties. In the mid-1940s he was to disavow abstraction and begin painting enigmatic, surrealist portraits and figure compositions. His painting, Mascara, of 1950, frames a portrait bust of a woman with a blue aura, her blue-black curly hair gathered in knobs and cascading down her back creating a contrast to her creamy-white face, neck, and bare shoulders. A narrow black mask, held to her face with no discernible ties, frames wide -opened eyes that peer in a slight sidewise glance. Grahamâs title, Mascara, suggests that the black framing of her eyes is no dime-store costume piece but rather the cosmetic product she has applied that veils her face and obscures her identity.