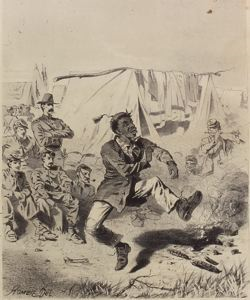 In the summer of 1863, Winslow Homer collaborated with Boston
lithographer Louis Prang on the series âCampaign Sketches,â a portfolio
of six lithographs that included A Pastime, The Baggage Train, and Our
Jolly Cook, which are in the Addisonâs collection.

In Our Jolly Cook, a crudely caricaturized African American camp cook
dances to a fiferâs melody for assembled white soldiers. While African
Americans were stereotyped in prints as happy-go-lucky and childlike
buffoons, they performed critical duties for Union troops in the fields,
including cooking, driving mule teams, building roads, and even burying
the dead. By the summer of 1863 they began fighting for the Union in
major battles. After the war, new images of the African Americans as an
independent freedmen and heroic soldiers slowly replaced the previous
stereotypes.

Your current search criteria is: Portfolio is "Themes: MLC Portfolio: Race and Otherness".