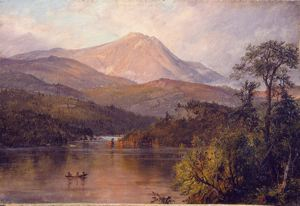 Frederic Edwin Church first visited Mount Katahdin, the highest point in Maine, in August 1852, after having postponed a planned expedition to South America until the following year. Only a handful of verbal references and sketches and one major easel painting, Mount Ktaadn (1853, Yale University Art Gallery, New Haven, Connecticut), can now be associated with his Maine trek of 1852. Yet he clearly found the scenery alluring, revisiting the region at least once during the 1850s and on five further occasions between 1876 and 1881.1

The present work is reasonably ascribed to the period immediately following Church's second documented journey to Katahdin, which he undertook with the writer Theodore Winthrop (1828-1861) and a local guide named Cancut during August and early September 1856. The two New Yorkers proceeded through central Maine via Greenville, where they met their escort, and then to Moosehead Lake. The overland and over-lake route, more venturesome than the coastal circuit via Bangor, rewarded the intrepid traveler with an approach to Mount Katahdin "in much finer outlines than from the eastward," according to a contemporary guidebook with which Church was familiar.2

The diminutive canvas itself probably was painted in New York City. Although neither signed nor dated, it is stylistically and technically consistent with his studio oils of the mid- and late 1850s.3 Shortly after completing it, the artist gave the picture to Winthrop, by then a close friend and sometime traveling companion, with whose relatives and descendants it remained until 1937. It was engraved for the posthumous volume of Winthrop's collected prose, Life in the Open Air, and Other Papers (1863), in which the titular essay recounts the Maine trip of 1856.4

Church composed the painting from two of his undated drawings, both now in the Cooper-Hewitt National Design Museum, Smithsonian Institution, in New York.5 The larger one depictsâpace an inscription on the verso not in Church's handâ"Katadin [sic] from the West." The scene, transcribed in graphite and white gouache highlights now turning dark red-to-black, is dominated by the angular peak which looms toward the right center, the tendril rock slides on its western face glinting like snow. The irregular middle ground, Church's gouache touching and spare annotations testify, is forested and intermittently rocky, though the foreground consists largely of an open field (a farm) bounded on the far side by scattered tree stumps. A sliver of "Ripogenus Lake" (Church's annotation) enters the prospect at the lower left. The smaller drawing, wholly in graphite, shifts to the eastern end of Ripogenus Lake, from which rise a substantial, tree-covered hill at the right marked by a rock face, a densely forested hillock at the left, and further ridges above. Rapids of the West Branch Penobscot River empty into the lake through an opening between the shoreline hills. The second drawing omits Mount Katahdin and neither drawing includes any atmospheric effects.

For the finished painting, Church in essence combined, distilled, and amplified his two sketches, the larger one furnishing the mountain, the smaller one supplying the middle ground and the lake. From there he opened the view to the lake, inserted the forested ledge at the near right to form a Claudian coulisse, added a few boulders near the rapids, and elevated the foothills, then draped the scene with sunset hues and introduced a moderately active atmosphere of mists, clouds, and blue sky. The burnished summit, from this vantage point resembling a volcanic cone, rises from a sloping platform of darkened hills to pierce a jagged hole in the clouds. The suggestion of volcanism reflects Church's first South American trip of 1853, with which, in turn, Winthrop, himself a visitor to Panama for six months in 1852-53, surely empathized; throughout Life in the Open Air, Winthrop referred to his artist-companion as "Iglesias"âSpanish for "Church." Other than a canoe carrying three male occupants on the lake, there is no sign of human presence.

Winthrop would readily have recognized the painting's topographic and temporal features as well as the identities of the canoeists.6 He devoted one chapter of Life in the Open Air, entitled "Ripogenus" (pp. 74-82), plus several paragraphs of the next chapter, "Toward Katahdin" (pp. 82-83), to the lake and its scenery. Noting that soon after the party arrived in late afternoon at the midpoint of its three-mile length, Church "was preserving the scene at its bel memento" (p. 75), Winthrop waxed eloquent on the "tarn," its rugged surroundings, and especially Mount Katahdin, "stooping forward and filling the sphereâ¦large and alone" (p. 74). The next day, seeking "a supreme view of the fair lake, and the clear mountain," he and Church climbed "the hill guarding the exit of the Penobscot from Ripogenus" (p. 83). Winthrop's word-pictures of the prospect at first twilight and that from the hill evoke the painting subsequently presented to him by his friend:

The oval lake was blue and calm, and that is already much to say; shadows of the western hills were growing over it, but flight after flight of illumined cloud soared above, to console the sky and the water for the coming of night... Furthermost and topmost, I saw Katahdin twenty [sic] miles away, a giant undwarfed by any rival. The remainder of the landscape was only minor and judiciously accessory. The hills were low before it, the lake lowly, and upright above lake and hilllified the mountain pyramid. Isolate greatness tells. There were no underling mounts about this mountain-in-chief And now on its shoulders and crest sunset shone, glowing. (p. 76)

Katahdinâ¦is eminent and emphatic, a signal and solitary pyramid, grander than any below the realms of the unchangeable, more distinctly mountainous than any mountain of those that stop short of the venerable honors of eternal snow. (p. 83)

A "sublime" topographical landscape merging multiple viewings and a pair of plein air drawings, Mount Katahdin was contrived as a talisman commemorative of a wilderness experience shared by three comrades. As such it was superficially accessible to many persons yet fully intelligible only to Church, Winthrop, and a select group of their acquaintances, most of whom were members of the cultural community of the northeastern United States. In those rather paradoxical respects the painting dovetails with several others by Church dating from the mid-1850s to the early 1870s.7 Evidently the present work was not publicly displayed before its acquisition by Phillips Academy in 1937. Its engraved reproduction, however, published less than two years after Winthrop's premature death at the battle of Big Bethel, early in the Civil War, thrust it into the public domain and in so doing transformed an exuberant, essentially personal, keepsake into a token of national loss and collective pro-Unionism. One may wonder how Church, an ardent Union supporter from the outset of the war, came to regard the image after 1861.

2. Thomas Addison Richards, Appletons' Illustrated Hand-Book of American Travel (New York: D. Appleton & Co., 1857), p. 55. According to Richards's preface (p. 6), Church contributed one or more illustrations to the volume. Richards's own vignette of Mount Katahdin (p. 55) is taken from a vantage similar to that in the present painting by Church.

4. Theodore Winthrop, Life in the Open Air, and Other Papers (Boston: Ticknor and Fields, 1863), p. iv: "The wood-cut of Katahdin is copied from an original sketch in oil by Mr. Church." The print is the second frontispiece of the book, the first one being a portrait of Winthrop engraved from a crayon likeness by Samuel Rowse. Rowse (1822-1901), a specialist in crayon portraiture who settled in New York toward the end of 1856, was associated personally and artistically with Church for many years: Rowse's bust-length portraits of Church's wife (c. 1860), mother (1870s), father (1870s), and mother-in-law (1886) are at Olana State Historic Site. A documented portrait of Church himself by Rowse, datable to late 1857 and perhaps approximately contemporaneous with that of Winthrop, is now lost.

6. Winthrop (pp. 53, 62) noted that as they embarked aboard the Moosehead Lake steamer, he, Church, and Cancut all wore "red shirts," and that while rowing on the West Branch of the Penobscot River all three men wore their "flamboyant" shirts.