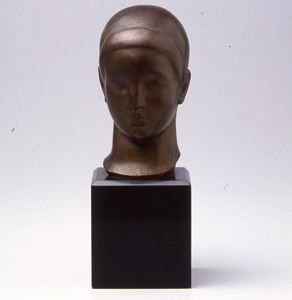 Head of a Woman

Sometime between 1900 and 1903, the Paris-born and trained sculptor, Gaston Lachaise, encountered Canadian-American Isabel Nagle, the woman who was to have a profound impact on his personal and artistic life. Describing her as a âmajesticâ in spite of her modest stature, Lachaise fell under her spell, following her to Boston and New York, where they finally married in 1917. From their first meeting, she served as his muse and as the model for the majority of his bold, sumptuous, and expressive sculpture. From the artistâs first New York exhibition, critical acclaim and patron support built Lachaiseâs reputation as one of Americaâs foremost early twentieth-century sculptors.

The Addison owns two small sculptures by Lachaise that, even in their small scale, exhibit the sculptorâs mastery of form. Head of a Woman, purchased from Madame Lachaise in 1938, is a serene if diminutive study for a never-realized twenty- two-foot statue planned for an interior niche in the AT&T building in New York. While also small in size, Seated Woman, a posthumous casting donated by the Lachaise Foundation in 1995, has the hallmarks of Lachaiseâs mature sculpture. The substantial fully-round female figure with arms folded across her nude chest, hair wrapped tightly and topped by a comb, has an architectonic presence. She sits in motionless calm, while the cape which drapes over her chair acts as a swirling counterpoint to her solidity, its powerful folds serving as the support for the sculpture.