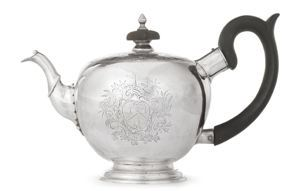 The substantial and elegant teapot made by Boston silversmith Jacob Hurd is one of the most unusual pieces of silver of the eighteenth century. Its beautiful proportions and fine engraving distinguish it as among the best pieces of silver produced in the largest, busiest, and most accomplished workshops in mid-century Boston. The engraving on the lid is almost without parallel in Boston silver. Normally lid engraving would consist of stylized flowers or garlands and perhaps the initials of the owner. This teapot features a lively hunt scene with stags, men on horseback, and trees. Engraved above the handle is a small farmhouse, or croft, with an image of a fox on the pediment. This passage refers to âFoxcroft,â the name of the family that commissioned the pot. By tracing the engraved coat of arms, the teapot can be identified as belonging to the parents of Phoebe Foxcroft Phillips, who, with her husband Samuel, were among the founders of Phillips Academy.

The teapot, as was the case for most Boston silver, was inspired by current forms popular in London. Engraving of a chase scene featuring animals would, however, never have appeared on London silver but was more likely to occur in Irish, German, or Dutch silver. Hurd, with Paul Revere and John Coney among the three greatest Boston silversmiths of the century, thus took inspiration from several sources to produce something uniquely American.

Your current search criteria is: Object is "Teapot".