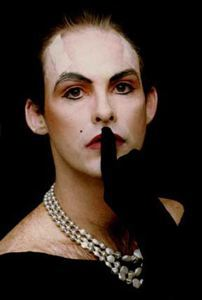 Reynoldsâs Survival AIDS weavings depict scans of hundreds of clippings from The New York
Times and other newspapers dealing with AIDS and gay rights that appeared in the late 1980s and early 1990s. He then arranged them to make formal and thematic connections and juxtapositions. Next, he layered additional scans of spots and splatters shot from syringes filled with his HIV positive blood. Often he includes his own photograph, in this weaving the man being facing arrest in the upper left hand corner. By photographing media accounts of the AIDS crisis, which themselves abstract daily news events into writing, and infusing his own image and blood, he has designed a space in which the experienced, the reported, the past, the present, the viewer, and the artist simultaneously exist. Shhh... is a self portrait of the artist in drag.