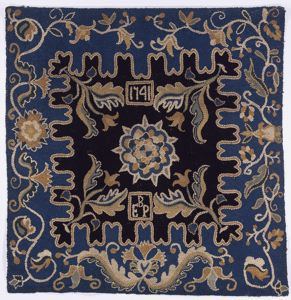 The bed rug, used as an outer bedcover during the cold New England winter, is a fascinating object of eighteenth- and early nineteenth-century domestic design, as its fabrication process was carried out single-handedlyâand therefore controlled exclusivelyâby the rug maker, from collecting, washing, and carding (or combing) the fleece to spinning it into wool yarn, dyeing the yarn, weaving the fabric, and finally embroidering the patterns. This sophisticated early example of an embroidered wool bed rug was made in Connecticut, the source of most extant bed rugs. In the roughly symmetrical, graphically dramatic floral patterns, tulips and carnations have been combined with broad stylized leaves in an imaginary composition featuring two tones of yellow accented by two tones of green, set against a black background with a deep blue border. The shape of this early bed rug, however, varies from later ones, which typically consist of a square with the bottom two corners rounded.

Two interesting clues pertaining to the bed rugâs history can be found within the design itself; above the floral centerpiece appears the year of its fabrication, while below there is a set of initials, âB/EP.â It is important to note that Phoebe Billings (1690-1775), nÃ©e Denison, was married to Ebenezer Billings, hence the initials âBâ for Billings at top, followed by their first initials, âEâ and âP.â The widespread tradition in eighteenth-century New England society, according to which young brides produced bedcovers with the coupleâs initials, would suggest that Phoebe and Ebenezer were married in 1741. What is curious in this instance, however, is that according to surviving records, the couple was married in 1706; in fact, in 1741 Phoebe was 51 years old, had already been married to Ebenezer for 35 years and given birth to ten children. Therefore, in the pre-Victorian era, when specific symbolic gifts for each major wedding anniversary were not yet established, the making of this rug was likely meant to commemorate the coupleâs 35th anniversary and celebrate a long and fruitful life in unison.