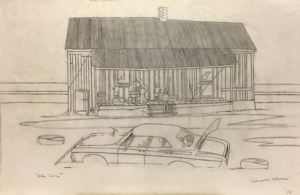 Ranking among the likes of Andrew Wyeth and Grant Wood, Carroll Cloar emerged in the 1950s as an important regionalist painter. After touring Europe and studying art at the Memphis Academy of Art, and the Art Studentsâ League in New York, Cloar earned McDowell and Guggenheim fellowships for travel across the United States, Mexico, and Europe. By 1954, Cloar established himself permanently in Memphis and continued to visit his hometown of Earle, Arkansas, just 30 miles away, for the remainder of his life. During his extended European sojourn, while sitting at the sidewalk cafÃ©s of Spain and Italy, Cloar came to appreciate the importance of his childhood memories and experiences in the development of his oeuvre. Between the mid-1950s and early 1990s, he spent considerable time taking in and photographing scenes of rural life, while he also collected antique photographs from the region, elements of which he incorporated into his compositions.

Fashioned in a naive style akin to that of Horace Pippin, many of his works convey an overwhelming sense of nostalgia, described by one critic in 1955 as a âconcrete expression to the ghosts of old memories.â The untitled 1978 drawingâa female protagonist in the foreground, a set of railroad tracks in the middle ground, and a simple wooden house in the background, complete with a cast of agrarian charactersâtypifies Cloarâs compositions. A number of photographs of junk cars in the Cloar Archives echo, in fact, the subject of this drawing. Increasingly, later works such as The Car trace changes in the daily life and social fabric of his native region. In this image, Cloarâs perspectival strategy has changed, with the house and car occupying the central and largest area of the composition, with few other hints alluding to the landscape beyond.

Your current search criteria is: Portfolio is "Exhibitions: Expanding the Narrative: Recent Acquisitions".