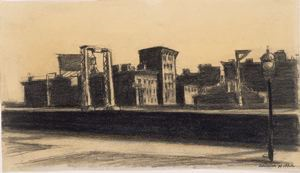 Study for "Manhattan Bridge Loop" No. 2

âThe very long horizontal shape of this pictureâ¦is
an effort to give a sensation of great lateral extent.
Carrying the main horizontal lines of the design
with little interruption to the edges of the picture,
is to enforce this idea and to make one conscious of
the space and elements beyond the limits of the
scene itself.â (Edward Hopper, 1939)

Edward Hopper painted Manhattan Bridge Loop at the
end of a decade in which his mature painting style
began to crystallize. It was a reductive style that
enabled him to create powerful expositions of the
buildings and streets of New York City and evoke
manâs alienation in the context of that urban
environmentâto create what Deborah Lyons stated
were âglimpses of private lives of quiet despair lived
within the public arena.â The paintingâs subject is the
approach to the Manhattan Bridge at the East River in
lower Manhattan. At a place in the city where the
rush of transportation and the crush of urban
dwelling intersectâtrolley tracks, bridge, and
closely-packed tenementsâthe artist has frozen a
moment of eerie stillness, bathed in cold crystalline
light; the only human presence is the solitary figure
trudging away under the shadow of the blank
embankment wall at the left. In Manhattan Bridge
Loop, states an early Addison press release, âthe artist
has taken a commonplace scene of city tenements
rising behind a concrete railway embankment and by
his treatment of the material describes the vast
reaches of a great city and a sense of the
overpowering force of its pressure on human
beings.â


When completed in April 1928, the painting
was sent to the Frank K. M. Rehn Gallery
where it was exhibited a number of times
before being bought in December 1928 by
Stephen C. Clark, a well-known collector of
modern American and European art. By
1928 Clark, an heir of the Singer Sewing
Machine Company and Clarkâs O. N. T.
Thread, was serving on the board of trustees
of the newly formed Museum of Modern Art
in New York, one of whose founders was
Lizzie P. Bliss, also an early benefactor of the
Addison Gallery of American Art. Bliss and
Robert McIntyre of the Macbeth Gallery, on
whom Clark often relied for advice and
assistance in buying for his collection, were
both members of the Addisonâs Art
Committee. In 1932, seven months after the
Addison opened its doors to the public,
Clark donated Manhattan Bridge Loop to the
museum, and soon after was asked to join
the Art Committee himself. Clarkâs gift was
not only one of the Addisonâs earliest
accessions, it also proved to be one of its
most significant.


In late 1939, the Addisonâs director Charles H.
Sawyer asked Hopper to participate in the
development of an exhibition focused on the
painting. The exhibition, the fifth of a series dealing
with issues of design, was called The Architecture of a
Painting: Edward Hopperâs Manhattan Bridge Loop. As
Sawyer wrote to Hopper, âOur purposeâ¦is not to
submit an artist to laboratory dissection, but to
encourage the observer to look father into the
picture and to see relationships beyond the
presentation of subject matter.â Perhaps engaged by
the opportunity to explain his work in concrete
terms, the usually reticent artist agreed to
participate.

For this single painting exhibition, a novel idea at
the time, Sawyer elicited from Hopper a rare and
illuminating statement about his working methods
and purpose. That statement, on public display for
the first time in nearly eighty years, is considered by
many Hopper scholars to be key to unlocking
Hopperâs own understanding of his approach to
painting and aesthetic point of view. Writing to
Sawyer, Hopper stated that his âaim in painting is
always, using nature as the medium, to try to project
upon canvas my most intimate reaction to the subject
as it appears when I like it most; when the facts are
given unity by my interest and prejudices.â
Hopper also generously provided the Addison with
âa few small black and white sketches made from the
factâ and a photograph of the site depicted in his
finished painting. These supporting materials, along
with a small selection of Hopperâs watercolors and
Manhattan Bridge Loop itself, were paired with
didactic panels that unpacked the many distinctive
formal elements present in the finished painting
including panels devoted to line, form, space,
composition, and color.

Study for "Manhattan Bridge Loop"
1940.71
Portfolio List Click a portfolio name to view all the objects in that portfolio
This object is a member of the following portfolios:

Your current search criteria is: Object is "Study for "Manhattan Bridge Loop" No. 2".