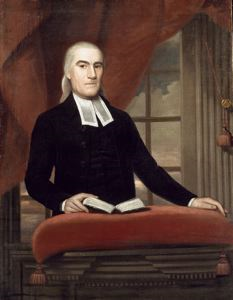 Ralph Earl (1751â1801), the eldest of four sons born to a prominent patriot and landowner in Worcester County, Massachusetts, spent most of his career as a successful painter of rural Connecticut patrons. Determined to be a painter at a young age, Earl refused to join the militia and ultimately was denounced as a loyalist, forcing him to flee to England in 1778. There he not only avoided imprisonment but was able to establish himself as a painter and learn from English examples. Having had little training available to him beyond the examples of fellow Connecticut painter Winthrop Chandler, and Boston artists Henry Pelham and Pelham's illustrious half-brother, John Singleton Copley, Earl then was able to meet English-trained artists and to secure patrons for portraits. Earl established himself first in Norwich; by 1784, he had moved to London, made the acquaintance of Benjamin West, and developed a style based on English portraiture. Shortly after his return to New York in 1785, Earl found himself in debtor's prison. Finally securing his release through portraits painted in jail, Earl moved to Connecticut in 1788 to pursue the remainder of his career as a portrait painter of prominent rural patrons. Earl's portraits document the pride of place felt by his patriotic Connecticut patrons. The artist portrays his subjects in their contexts, surrounded by the comfortable interiors of their homes, often with the local Connecticut landscape seen through windows.

Earl's portrait of Reverend Nathaniel Taylor was painted in New Milford, Connecticut where Earl painted a total of nineteen members of the Taylor and Boardman families. Taylor's portrait was painted at the time when he retired as the second town minister, a post he had held for fifty-two years. Earl also painted Taylor's wife, Tamar Boardman Taylor, daughter of the first town minister, Reverend Daniel Boardman, as well as the Taylor's son, in Colonel William Taylor, and his wife and son, in Mrs. William Taylor and Son Daniel. Earl's choice of a setting, with the minister standing behind an austere pulpit before a shuttered window, reflects the conservative practicality of the sitter. Elizabeth Mankin Kornhauser's recent study, Ralph Earl The Face of the Young Republic, quotes a ministerial colleague of Taylor: "as a preacher .. . he held high rank. His preaching was generally of a plain and practical cast, fitting to edify both the humbler and the more intelligent classes . . . .He had a fine manly voice, and his manner in the pulpit, while it was free from all artificial airs, was well fitted to awaken and hold the attention . . . .No one was more earnest than he in enjoining habits of temperance and industry."

Your current search criteria is: Object is "Reverend Nathaniel Taylor".