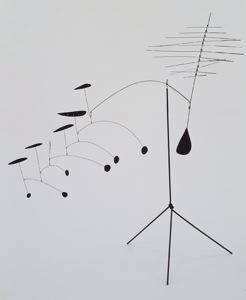 Alexander Calder, known for the soaring abstract mobiles and stabiles of his mature career, was trained as a mechanical engineer. The son of painter Nanette Lederer and renowned sculptor Alexander Stirling Calder, he showed little interest in fine art until the 1920s when he began studying composition, painting, and drawing at the Art Students League in New York under such leading artists as John Sloan, George Luks, William PÃ¨ne du Bois, and Boardman Robinson.

Calderâs early work included painting, wood carvings, andwire-sculpturesâthe latter which he called âdrawings in space.â In 1926 he exhibited his first paintings in New York; the following year he moved to Paris with the hope to exhibit, sell, and gain critical attention. Two years later, in 1929, the exhibition, Alexander Calder Sculpture in Wood and in Wire, was mounted at the Gallerie Neumann-Nierendorf in Berlin. It contained forty wire sculptures, one mask made of tin plate, and seven wood sculptures, including Woman with Umbrella, 1929. This sculpture was given to the Addison in 1951, where it joined Calderâs dynamic mobile Horizontal Spines, 1942, purchased by the museum in 1943.

Also in the Addison collection is Calderâs fatherâs plaster study, Woman Cutting Toe Nails, donated to the museum in 1953 by the artistâs mother, Mrs. A. Stirling Calder.