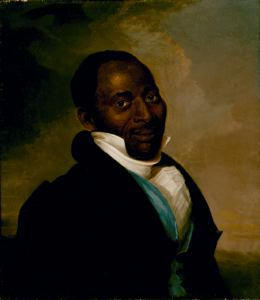 As a common working person who was the town barber, but especially as a person of color, Abraham Hanson was an unusual subject for a portraitist in the early nineteenth century. Most significant is the painting's honest, unprejudiced portrayal that varies dramatically from the contemporary stereotyped depictions of servile slaves. As Marvin Sandak claimed in The Portrayal of the Negro in American Painting, "successful in imparting a sense of the living man [was] the itinerant Down East painter Jeremiah Hardy (a pupil of Samuel Morse), whose broad-browed, weighty head of Abraham Hanson is confident and witty without genteel or minstel disguise . . . ." At least one other portrait of a person of color attributed to Hardy is a remarkably sensitive and noble portrait of a woman in a red shawl, presently in a private collection.

Jeremiah Pearson Hardy (1800â1887) was a provincial New England painter of portraits, genre, animals, and still-lifes. Born in Pelham, New Hampshire, he moved with his family to Hampden, Maine in 1811. Largely self-taught, he studied art briefly in Boston. Quoted in the one substantive article about Hardy published in the 1939 Old-Time New England, his daughter wrote, "His first teacher was Mr. Brown of Boston, himself a pupil of the English painter Moreland. A few years later he studied with Samuel F.B. Morse, of New York." His daughter also claimed that while in Boston in the 1820s Hardy visited Washington Allston's studio and knew Henry Inman. After setting up a studio in Boston, Hardy abruptly moved to Hampden in late 1826 or early 1827, followed in 1828 by a move to Bangor where he remained for the rest of his life. Writing of Hanson's work of this period, his daughter noted, "He was constantly studying problems of composition and lighting . . . .Now were done such pictures as those of his parents, of his uncles the Pearson brothers, the Indian girl Sarah and the negro barber, Hanson, with genre pictures and firelight and candlelight studies. These pictures not only developed his talent but they were needed to hang upon the walls of his bare little studio, and variety there was essential." While she added that these pictures were never intended for sale, it is hard to imagine that Hardy could sustain himself without encouraging sales. His existing portraits of family and local sitters show a capable painter producing likenesses in the manner of Morse.