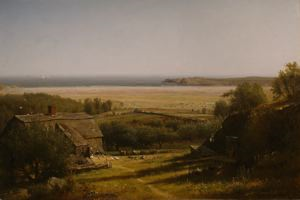 Home by the Sea

Thomas Worthington Whittredge began his career as a house painter. After spending some time as a sign painter, daguerreotypist, and later a portraitist, he turned to landscape painting in 1843. Essentially self-taught, Whittredge traveled to Europe in 1849 in an effort to improve his skills. Upon his return to New York in 1859, he was deeply impressed by the naturalistic paintings of Asher B. Durand and resolved to develop his own form of American landscape within the Hudson River School tradition. The majority of Whittredge's early landscapes are depictions of woodland interiors. He characteristically sought simple subjects and eschewed the dramatic scenery of early landscapists such as Albert Bierstadt and Frederic Church for âmore homely scenery."1

Whittredge's style began to change as a result of three trips to the West, in 1866, 1870, and 1871. True to his character, he chose to depict the pastoral and simple aspects of the Western landscape as opposed to the rugged and sublime. Yet while his pictures from this period retain the serene calm of his earlier work, the wide open space of the Western plains resulted in an expansiveness and breadth of vision not seen in his earlier views of dense forest interiors.

Whittredge brought this new style as well as an interest in outdoor light back to the East. The impact of his Western experience can be seen in his series of paintings of Newport, Rhode Island, begun in the 1870s, of which the Addison's Home by the Sea is one. Although emphasis is placed on the pastoral foreground, the trees and wooden structures on either side of the canvas channel the eye through the narrowed middle ground back to the sea and sky, which open up to a wide, flat vista much like his paintings of the Western plains. Its elevated view and strong horizon line also relate the picture to the work of Luminist painters such as John Kensett and Sanford Gifford, who both accompanied Whittredge on his second trip out West. Between 1872 and 1885 Whittredge painted at least seven versions of this scene from various vantage points, and the Addison's version is thought to be one of the earliest.2 Although the exact location of the scene has not been identified, most authorities assign it to the southern Newport or Middletown coast.3

This scene is typical of Whittredge in its hushed calm and "pleasantness.â4 Although weather-beaten, the farmhouse is securely planted within the protective grove of trees. The presence of barnyard animals and neatly plowed fields, as well as the men and women attending to various chores, attest to the farm's success. Man is at peace with nature. The warm, afternoon glow that pervades the entire canvas unites the painting's picturesque elements into a harmonious whole. In his autobiography Whittredge expressed a personal attachment to Newport:

In searching for subjects for my pictures, I went several summers to Newport. This part of the New England littoral, the paradise of summer dwellers, had great charm for me, though of a different character from the fascinations it always seemed to possess for the fashionable people, I had heard much of it and the neighborhood surrounding it when I was a child, and many things I saw seemed perfectly familiar to me, although never seen beforeâ¦. In short it was the land of my forefathers.5

The vague longing suggested by the fading afternoon light in Home by the Sea goes beyond the artist's personal feelings of nostalgia, conveying a national sentiment associated with the Colonial Revival era. The dilapidated eighteenth-century farmhouse represents a passing way of lifeâa simpler, quieter time. By 1872, Newport had become a "bustling seaside resort.â6 Large mansions were quickly replacing farmhouses such as the one depicted by Whittredge. In the same way that his Western pictures show Indians living peacefully and in harmony with nature before the disruptive arrival of the white settlers, this painting reflects the rural farmer before the advent of post-Civil War urban and industrial expansion.

In the subsequent versions of Home by the Sea, dated in the 1880s, Whittredge retained the nostalgia of earlier views, but the attention to detail and clarity of line were no longer present.