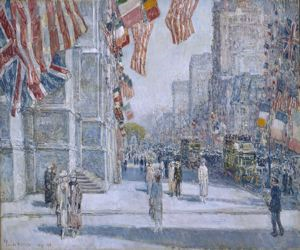 Early Morning on the Avenue in May 1917

Early Morning on the Avenue in May 1917 belongs to a series of flag paintings that Frederick Childe Hassam created during World War I, between 1916 and 1919. Totaling nearly thirty canvases, the series constituted the artistâs last significant body of work. It demonstrates his vigorous brushwork, bright palette, and what the critics called his truly American interpretation of the French aesthetic of Impressionism.

French Impressionists had recorded contemporary life, usually under bright, sunny spring skies. Hassam was also interested in capturing weather conditions: Early Morning on the Avenue is distinct in the series for its overall whiteness, the brilliancy of the hue transforming the cloudless blue sky to a pearly white and bleaching the buildings and sidewalks to opalescent tones. The flag paintings, however, were not just about weather and light. They were begun in response to the flag displays and parades that were organized in New York City as part of the war effort. Hassam was a patriot and an ardent Anglophile, and he used these paintings to demonstrate his support for the Allies. Color and light therefore took on a metaphorical significance, the pervasiveness of white in Early Morning on the Avenue suggesting purity and the righteousness of the Allied cause.

The imagery depicted in the flag paintings was also crucial to their meaning. Nearly all were scenes of Fifth Avenue or of the cross streets directly off that famous thoroughfare. By the time Hassam created them he had dedicated over twenty five years to depicting the largest and most modern city in the United States. Fifth Avenue was the shopping, business, and residential artery of upper-class society. The area teemed with people constantly bustling to and fro, as evidenced by the well-dressed pedestrians and green double-decker buses packed to capacity moving along Fifth Avenue at Fifty-third Street, the locale of Early Morning on the Avenue.

The majority of the flag scenes are vertical in format. In them Hassam emphasized the soaring character of modern New York, its skyline newly transformed by the erection of skyscrapers. Only three of the paintings in the series are horizontal, and only in Early Morning on the Avenue did Hassam incorporate the closeup, street-level view typical of his peacetime scenes with a dramatic distant vista of skyscrapers. As the series progressed, the scale of the flags increased, becoming more symbolically important until they were so large that they dominated and even obscured the buildings from which they flew. By juxtaposing the flags of the Allied nations with the new buildings, Hassam indicated their interrelationship. The technology that enabled Americans to build the modern high-rises was the same technology that would enable the Allied forces to win the war.

The large flags briskly moving in the wind in Early Morning on the Avenue seem to hover over the people as if to protect and bless their activity. Most conspicuous are those hanging from the faÃ§ade of St. Thomas, the large edifice on the left that takes up a third of the composition. Although the Episcopal congregation of St. Thomas dated from 1823, its first church on the Fifth Avenue site was not constructed until 1867; a fire in the early part of the twentieth century destroyed this building. A new church in the popular Gothic Revival style, designed by Ralph Adams Cram and
Bertram G. Goodhue of the noted architectural firm of Cram, Goodhue, and Ferguson, was completed in 1913. It was this relatively recent building, its white stone still clean, that Hassam depicted gleaming in the sunlight. Houses of worship figure prominently throughout the flag series. St. Thomas appears in several other paintings as well as in a print (St. Thomasâs New York, 1918, of which the Addison owns a copy). Often its distinctive faÃ§ade, in particular its majestic square corner tower, facilitates identification of the site, as in Allies Day, May 1917 (National Gallery of Art, Washington, D.C.), painted the same month and year as Early Morning on the Avenue in May 1917.

Although Hassam exhibited the flag series five times, the Addison painting was included only in the first showing, at the Durand-Ruel Galleries in New York during the late autumn of 1918. It was the sole work sold from the exhibition, although the identity of the purchaser is not known.1

Early Morning on the Avenue was later bought by Candace C. Stimson (1869-1944), and it was one of several significant turn-of-the-century American paintings she bequeathed to the Addison Gallery at Phillips Academy. Stimsonâs collecting taste may have been guided by her grandmother Candace Wheeler (1827-1923), a textile and wallpaper designer who was one of the most influential women artists of the American Aesthetic movement working in New York at the time of Hassamâs early residence. Stimson probably selected Phillips Academy as the beneficiary of her collection because her brother, Henry Lewis Stimson (1867-1950), was an alumnus. She told the director of the Addison Gallery that she had purchased the Hassam painting specifically with the school in mind,2 although the exact reasons for her selection are not documented. Robert G. McIntyre of the Macbeth Gallery, Hassamâs New York dealer, may have encouraged her purchase, for McIntyre served on the art committee of the newly formed Addison Gallery and was instrumental in Hassam working at the school in 1930,3 the same year in which Candace Stimson acquired Early Morning on the Avenue from the Macbeth Gallery.

The scene may have seemed to her appropriate for a boyâs school since, in addition to its color and sense of life, it celebrated patriotism and democracy, and alluded to the importance of religionâconcepts that a school such as Phillips Academy would seek to instill in its young men. Such ideals were significant to the Stimson family: one of Candaceâs uncles was a Congregationalist minister, and during World War I Candace herself assisted her father, Dr. Lewis A. Stimson, on a medical relief mission to Belgium. Her statesman brother, who served as an artillery colonel in France in 1917-18, was Secretary of War in the Roosevelt administration, from 1940 to 1945.


1. Durand-Ruel Galleries, New York, âExhibition of a Series of Paintings of the Avenue of the Allies by Childe Hassam,â 15 Novemberâ7 December 1918, no. 17. The copy of this catalogue in the Archives of American Art, Smithsonian Institution, Washington, D.C. (microfilm reel NAA-2) is annotated with the word âsoldâ next to no. 17. Fifth Avenue was referred to as the âAvenue of the Alliesâ during the autumn of 1918 as part of the Fourth Liberty Loan Drive celebrations. The name, which postdates the Addison work, caught on and thereafter was mistakenly applied to many of Hassamâs flag paintings, including this one.

3. The Addisonâs collection includes three works on paper created during Hassamâs visit to Phillips Academy in 1930. These are: Campus, Andover (etching on laid paper); The Campus and Library, Andover (etching on wove paper); and The Campus and Library, Andover (pencil and colored crayon on paper). These works, gifts of Mrs. Childe Hassam, are part of the Addisonâs extensive holdings of Hassamâs work, which include five paintings, thirty-seven prints, and three works on paper.

Your current search criteria is: Object is "Early Morning on the Avenue in May 1917".