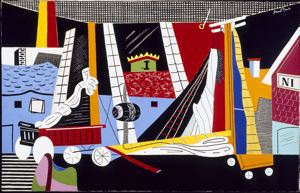 In Red Cart, early modernist painter Stuart Davis, moved by the European works he saw at New Yorkâs 1913 Armory Show, applied the flat, linear, and geometric shapes and bold, rich colors of Cubism to a uniquely American harbor scene he experienced in Gloucester, Massachusetts, where he summered from 1915 to 1940.

Davis explained that the masts of schooners âdefine the often empty sky expanse. They function as a color-space coordinate between earth and sky. From the masts of schooners the artist eventually learns to invent his own coordinates when for some unavoidable reason they are not present.â In Red Cart, one of Davisâs most influential paintings of the 1930s, the artist plays with painterly illusion by suggesting that his three-dimensional scene is actually a two-dimensional stage screen hung from grommets.

Stuart Davis, one of this country's greatest artists, decisively affected the course of American art for six decades, from Ashcan realism to color-field painting of the 1960s. He was a spokesman for and defender of modern art, especially during the turbulent social, political, and economic upheavals of the 1920s and 1930s, when the very tenets of modernism were questioned.

Davis was born in 1892 in Philadelphia to artist parents who fully supported him in his choice of career. After moving to East Orange, New Jersey, Davis studied with Robert Henri in New York from 1909 to 1912. Henri exhorted his students to absorb themselves in, and to let their art flow from, the pace and drama of the immediate world around them, a lesson Davis never forgot. He was profoundly affected by the 1913 Armory Show, where he saw Post-Impressionism, Matisse, and Cubism in depth and "resolved... to become a 'modern' artist.â1 Thereafter, his art primarily depicted uniquely American scenes through what he believed was the universal language of modern art, especially Cubism. In 1921 he undertook a prolonged and systematic exploration of Cubism in its myriad aspects. By 1924 he had developed the elements of his mature style, a flat, linear, geometricizing Cubism, combined with bold, high-keyed color inspired by Matisse.

Red Cart of 1932 is a landmark picture in a year of peak activity. It was the culmination of a series of synthetic, decorative Cubist works that Davis had begun in 1928 after completing his most famous paintings, the Egg Beaters. The subsequent paintings, including Red Cart, are often viewed as a "retreat" from the distilled rigor of the Egg Beaters. They are not; they are paintings of another order, for in them Davis pursued his long-standing practice of exploring all possible stylistic varieties of a given mode, in this case Cubism.

Red Cart was based, as were most of his paintings at this time, on a view of the harbor in Gloucester, Massachusetts, where Davis spent long and productive summers from 1915 until 1940.2 It is one of the ironies of his career that while he is portrayed as a quintessentially urban artist from New York who loved jazz, many of his most important pictures took Gloucester, long home to a thriving artist's colony, as their subject. Davis loved this beautiful town and was particularly drawn to its working port in which its ships, docks, and vistas offered myriad pictorial possibilities. A schooner is anchored by the dock in the foreground, on which the red cart is stationed at left. Surrounding the dock we see the known, actual houses and factories that in some cases still exist in Gloucester; they were not invented, and we understand why Davis always referred to himself as a realist artist, not as an abstractionist. Davis, like Monet, was especially intrigued by the vertical, angular structure of the ships' masts, which offered a ready-made architecture to explore. For Davis, it paralleled the Cubist design that he had been developing for over a decade.

In his notebooks, Davis wrote and theorized extensively about the angle and the triangle as the basic units of pictorial construction. He saw space as continuous and matter as discontinuous, and set himself to analyze the shapes of space, not the shapes of objects in space. In this way he came to understand the physical fact, the reality of the painting, as the two-dimensional division of the surface. Red Cart is a marvel of a seemingly unending series of angular connections and intersections, by which we can, as Davis put it, "visualize the subject objectively in terms of sequential area alternations.â3

Davis was careful to emphasize that this was not a matter of mathematics or rules but purely of artistic intuition. It is a measure of his powers that for all his theorizing his paintings always have a fresh, spontaneous look and feel about them. Often they are punctuated by Davis's characteristic wit. Here, for example, the harbor scene appears to be painted on a stage flat, attached by rope through an eyelet in the canvas to an indeterminate backdrop formed by the black and white grid at the top, and projecting toward the viewer's space. This declares that for all its topographic exactitude the painting is, finally, a two-dimensional, fictive construction.

Red Cart is evidence that Davis was a powerful and original colorist. The deep, rich reds, blues, and yellows are almost palpable, and are enhanced and made all the more resonant by the extensive use of blacks and white. (No one was to make such effective use of blacks and white until Willem de Kooning, Franz Kline, and Robert Motherwell in the late 1940s.) Color, no less than angle and line, carries and defines this paintingâthe last before Davis launched in the same year, 1932, a series rendered solely in black and white that also took Gloucester harbor as their subject.

2. In 1939, Davis made a print after Red Cart, which for reasons unknown he called New Jersey Landscape.

Your current search criteria is: Object is "Red Cart".