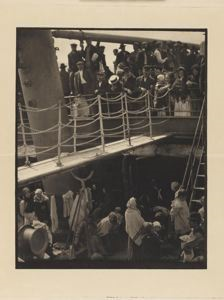 For Alfred Stieglitz The Steerage was a landmark imageâone that he returned to and reassessed many times during his long career. In fact, late in life he claimed, "When it was published, I felt that if all my photographs were lost and I were represented only by [it] that would be quite all right."1 Taken in 1907 during an ocean voyage made with his family, Stieglitz's photograph depicts a group of European emigrants on board the Kaiser Wilhelm II returning to their homelands, having been barred entry to the United States. The steerage-class travelers stand huddled together with their children and belongings on the ship's crowded decks, flanked by a smokestack funnel on the left and bisected by the brightly lit expanse of a wooden gangplank. With its sharp focus and strong contrasts of dark and light forms, this image by Stieglitz signaled a dramatic shift away from the hazy, atmospheric views and idealized subjects that he and his fellow Photo-Secessionists had favored since the 189os.

Whether Stieglitz actually recognized the significance of The Steerage at the time of its making, or only in retrospect, is debatable,2 but more than three decades later, he described it in great detail:

On the upper deck, looking over the railing, there was a young man with a straw hat. The shape of the hat was round. He was watching the men and women and children on the lower steerage deck. Only men were on the upper deck. The whole scene fascinated me. I longed to escape from my surroundings and join these people.... I saw shapes related to each other. I saw a picture of shapes and underlying that of the feeling I had about life.3

He maintained that the photograph had been a revelation for himâa scene encountered by chance and captured serendipitously on his Graflex camera's last unexposed plate. The plight of these displaced people and their cramped living conditions seem not to have affected him; what fascinated Stieglitz were the graphic qualities of the view before him and his own, very personal response to it.

The Steerage was first published in 1911 as a gravure in Camera Work, the deluxe quarterly magazine that was the mouthpiece of the Photo-Secession group. The October issue, the second since the magazine's founding to showcase Stieglitz's work, also included fifteen additional images by him, nearly all of them distinctly modern subjects, such as ocean liners, airplanes, dirigibles, skyscrapers, and the billowing smokestacks of New York City. The debut of The Steerage in the pages of Camera Work came at an important moment in Stieglitz's careerâa period of transition between his dual ambitions of achieving fine-art status for photography and promoting avant-garde art in America. In 1910 he had organized the large photography exhibition at the Albright Art Gallery in Buffalo, which marked the end of his active championing of pictorialist photography and the decline of the movement as a whole. About this time, Stieglitz also began showing nonphotographic work at his Little Galleries at 291 Fifth Avenue, introducing Cubism, Expressionism, Futurism, and non-Western art to a conservative American public. This contact with the latest in modernism influenced his own work, in turn, prompting him to focus on the more formal and objective aspects of the medium and to argue that "photographers must learn not to be ashamed to have their photographs look like photographs.â4 The last consecutive issue of Camera Work came out in January 1915; the next oneâdue in part because of its declining readershipâdid not appear until nearly two years later. In the meantime, three of the members of Stieglitz's circle, Marius De Zayas, Paul Haviland, and Agnes Ernst Meyer, began publishing one of the most innovative of the several "little" magazines to spring up during this period. With monetary backing from Stieglitz and a room of his gallery as their headquarters, the trio launched an experimental monthly in a tabloid format which they called 291. Its Dada-inspired typography, daring layout, and focus on modern art, music, and poetry, made 291 a fitting offshoot of Camera Work. The magazine, however, lost money from the start, and 291's editors were forced to cease production after only a dozen issues. The September-October double issue featured a tribute to Stieglitz, in the form of a single large photogravure of The Steerage printed on heavy Japanese vellum. In their accompanying essays Haviland and De Zayas discussed the photographer's considerable influence as exemplified by this powerful early image, and De Zayas asserted that Stieglitz's vision "comprises the history of photography in the United States."5

In 1953, Stieglitz's widow, Georgia O'Keeffe, gave the Addison Gallery twenty-two volumes of Camera Work and six issues of 291. Following his death seven years earlier, at the age of eighty-two, the difficult task of dispersing his estate had fallen to O'Keeffe. Although little is known of the circumstances surrounding this gift of publications, it suggests that she understood their importance to Stieglitz, not only for their fine photographic reproductions, but also for the literate and wide-ranging texts which "framed" the images and greatly enhanced their meaning.6

2. See, for example, James S. Terry, "The Problem of 'The Steerage,'" History of Photography 6 (July 1982), pp. 211-22; and Sarah Greenough and Juan Hamilton, Alfred Stieglitz, Photographs & Writings (Washington, D.C.: National Gallery of Art, 1983), pp. 29-30 n. 16. Both Greenough and Terry point out that if, in fact, Stieglitz understood the great importance of this work in 1907, it is surprising that he did not publish it in Camera Work until four years later; nor did he include it in any of the major exhibitions that he was organizing at the time, including the Albright Art Gallery show of 1910.

6. There is no record in the Addison Gallery Archives as to why O'Keeffe donated these magazines to the Gallery, although the museum's well-known early commitment to photography may at least partly explain it. The Addison does not own any original prints by Stieglitz, but did have a long-standing relationship with O'Keeffe's dealer, Edith Halpert of The Downtown Gallery, New York, and had purchased one of O'Keeffe's paintings for the collection as early as 1947. Six additional issues of Camera Work were purchased for the museum in July 1989.