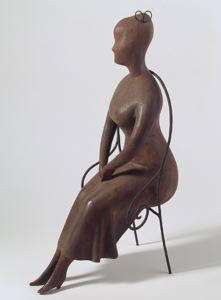 When Nadelman exhibited Seated Woman in 1919, it was accompanied by another plaster figure of a seated man wearing a bowler hat. While these figures may have seemed like caricatures, for Nadelman they were a means of keeping alive age-old multifarious traditions of representing the human form. In an interview that year, Nadelman explained: âWe have all been accustomed, in sculpture shows, to seeing figures of women represented nude, and portraits of men fully clothed, even to realistic buttons on their coats and creases in their trousers. For reasons of my own . . . I show the ladies dressed as we always see them, and the men with their hats on.â The two preparatory drawings for Seated Woman, also in this gallery, shed light on artistâs process.

Seated Woman is a pivotal work in the annals of Elie Nadelman's sculptural aesthetics and their reception. The small painted-plaster prototype of this piece made its first recorded appearance in 1917 in a World War I benefit exhibition called the "Allies of Sculpture," held at the fashionable roof garden of the Ritz-Carlton Hotel in New York City.1 Nadelman had been in this country for three years by then and had already had solo exhibitions at Alfred Stieglitz's 291 Gallery and at the Scott and Fowles Gallery. (Through the latter gallery, in particular, he was handily selling bronzes and marbles of his trademark animal subjects, figure studies, and ideal heads to just the sort of patrons who had organized the sculpture benefit.) While his bronze Resting Stag was well received in the "Allies of Sculpture" show, his painted-plaster sculptures were moved around the exhibition in a clash of wills between supporters and detractors, and eventually the figure of the seated woman fell, or was knocked, off her pedestal and broke. Nadelman remade the work, though, for his 1919 exhibition at M. Knoedler and Co., where it was accompanied by, among other plaster figures, that of a seated man wearing a bowler. That exhibition was seen at the Bernheim-Jeune gallery in Paris the next year.

While these genre figures may have seemed like caricatures, for Nadelman they were a means of keeping alive the multifarious and age-old tradition of representing the human form. Certainly, the man seated with his hat on must have appeared impertinent and out of place in some circles, but the seated woman has a well-meaning refinement that brings herâperhaps painfullyâclose to the organizers of the rooftop benefit. She was not a portrait but a type. She also sported blue hair. In a 1919 interview, Nadelman explained himself:

We have all been accustomed, in sculpture shows, to seeing figures of women represented nude, and portraits of men fully clothed, even to realistic buttons on their coats and creases in their trousers. For reasons of my ownâand I have at least 156 of themâI show the ladies dressed as we always see them, and the men with their hats on.

As for the blue hair:

you never think of questioning the glaring white of plaster or marble, nor the metallic glitter of bronze, in a piece of portrait sculpture. The one is just as un-lifelike as the otherâ¦. I am perfectly consistent in thus defining the light-and-shade relation of hair or beard to the flesh quality of the face.2

Nadelman was intrigued by the interplay of painted and realized forms in sculpture, and hairdos provided an arena for myriad variations.3 As early as 1910, the sculptor had written in Stieglitz's journal, Camera Work: "The subject of any work is for me nothing but a pretext for creating significant forms, relations of forms which create a new life that has nothing to do with life in nature.â4 Subjects notwithstanding, then, Nadelman was most interested in the forms that they could represent and accommodate.

The plasters in the Knoedler exhibition were meant to serve as models to be realized in other media. A price list exists from that show with different entries for works in wood (more expensive) and bronze (less expensive).5 Seated Woman is the only one of these genre pieces known to have also been made in marble (estate of the artist); she is sitting on a backless plinth, with arms cut off below the shoulder, though her hands are folded demurely in her lap, as in the Addison's figure.

A group of the genre figuresânow in woodâwas presented in 1925 at Scott and Fowles, along with related bronze busts and the artist's streamlined, classicizing marble heads. Photographs of Seated Woman in the Scott and Fowles show reveal the sculpture as unpainted, differing in that respect from the plaster model and some of the other wood pieces. In both the plaster and wood versions, the woman is seated on an openwork iron chair with two back legsâall that are needed, along with her own two legs, to keep the piece upright. The wire bow in her hair echoes the linear curves of the chair.

By 1925 Nadelman was collecting American and European folk art, and echoes of carrousel and cigar-store figures, ships' figureheads, and dolls and mannequins can be sensed in his wood figures. As with his sculpture in marble, Nadelman had the rough preliminary work done by skilled assistants or outside workshops, himself tending to details and painting the figures (if he decided on this course) at the final stages. He was not interested in direct carving. He regularly had sculptures reduced and enlarged from plaster models, as well as duplicated or approximated in more than one material, and he authorized sculptures to be made in editions. Conceptual and physical variations interested him more than "truth to materials."

In May 1925 the Scott and Fowles exhibition was more or less duplicated at the Arts Club of Chicago. The next year, Seated Woman and Seated Man were shown in New York in Edith Halpert's Our Gallery, the precursor of her Downtown Gallery. She shared Nadelman's interest in folk art, which she sometimes exhibited alongside contemporary art.

Few of Nadelman's wood genre figures sold during his lifetime, and by the 1930s they were relegated to storage. After his death in 1946, his widow, Viola Nadelman, recorded two examples of Seated Woman in an informal list of wooden pieces discovered in the house.6 The Addison's version has a less pronounced bun at the back of the woman's head, closer to the plaster version than the other wood example (which was shown in the artist's 1948 retrospective at The Museum of Modern Art, New York, and is now in the collection of the Portland Museum of Art, Oregon), and the position of her head differs by being slightly raised as if looking into the distance. Since many of Nadelman's wood sculptures were found to have sustained damage during their years of neglect, some repairs were made after his death, by craftsmen that the artist had himself employed or by artists knowledgeable about the respective materials. Repairs were overseen by the artist's widow and by Lincoln Kirstein, who were together responsible for the posthumous resuscitation of Nadelman's reputation. The Addison's Seated Woman probably had some rehabilitative work done at that time, a job that would have been relatively easy owing to the existence of copious photographsâauthorized by Nadelman himselfâof different versions of the sculpture.7


1. A 1917 photograph of the plaster Seated Woman under a striped tent at the Ritz Carlton shows art mavens Muriel Draper and Christian Brinton standing next to it, providing a sense of scale lacking in most other photographs or descriptions. Elie Nadelman Papers, Estate of the artist.

7. Ibid. The photographs of the plaster Seated Woman were taken by Mattie Edwards Hewitt, and those of the wood version by Rudolf Smutny.