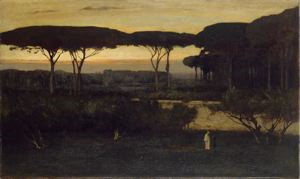 
Medium and Support: Oil on canvas
Credit Line: Gift of Stephen C. Clark in recognition of the 25th Anniversary of the Addison Gallery
Accession Number: 1956.6
Current Location: On view : 102

George Inness painted The Monk during his second and most extensive trip to Italy in the 1870s. According to his son and biographer George Inness, Jr., financial considerations precipitated his five-year European sojourn: âConcluding that foreign subjects would be more salable than domestic ones, Williams & Everett [Innessâs Boston dealers] induced my father to go abroad, agreeing to take his pictures at stated sums. So in the spring of 1870 we sailed for the Old World, landing at Liverpool.â (1) Nicolai Cikovsky, Jr., has also highlighted the commercial aspect of this trip, noting the artistâs attempts to capitalize on the ready market for Italian views by executing a number of paintings that focused on popular tourist sites or scenes of contemporary Italian life. (2) Yet, although the setting of The Monk has been identified as the grounds of the Villa Barberini, an estate in the Alban Hills southeast of Rome, and the figure presumably belongs to the Capucin monastery located in the area (3) the painting escapes categorization as a typical genre scene because of its mystical intensity. Inness underscored the visionary nature of this landscape through his glowing use of color and compositional daring. In the waning hours of the day, the figure of a solitary, white-robed monk moves through a darkening landscape. With head bowed, he follows a path bordered by olive trees and a white stone wall. Beyond, a cluster of stone pines, which rises above the dark grove of the background, stands silhouetted against the incandescent light transfiguring the sky. Rejecting the tight brushwork of his early style, Inness painted The Monk with broad strokes, reflecting the transfer of his allegiance sometime in the 1850s from the Hudson River School to the Barbizon School. The Monk also anticipates the formal inventiveness of his late style of the 1880s and 1890s. Although providing an ample foreground, the artist has drastically flattened the area behind the wall, intensifying the planar organization of the composition. The pine trees appear to float in the middle ground, while the restricted tones here and the opacity of the paint at the horizon limit spatial recession.

The degree of abstraction found in The Monk is one indication of the differences separating Inness from his contemporaries. While their promoters extolled the realism of landscapes by artists such as Albert Bierstadt and Frederic Edwin Church, Inness seemed to invite viewers to assess the psychological truth of his scenes rather than their topographical verisimilitude. Although many of his landscapes are identifiable and present credible representations of natural forms, Inness used a setting primarily to evoke a particular state of mind. The time of day, silent figure, and historic landscape of The Monk, for example, fuse to create a mood of nostalgic introspection. As Inness observed to an interviewer from Harperâs magazine:

A work of art does not appeal to the intellect. It does not appeal to the moral sense. Its aim is not to instruct, not to edify, but to awaken an emotion. This emotion may be one of love, of pity, of veneration, of hate, of pleasure, or of pain; but it must be a single emotion, if the work has unity, as every such work should have, and the true beauty of the work consists in the beauty of the sentiment or emotion which it inspires. Its real greatness consists in the quality and force of this emotion.4

For Inness, the emotions that guided his life and art stemmed from his own spiritual striving. After experimenting with several organized faiths, he fell under the spell of the writings of the eighteenth-century mystic and philosopher Emanuel Swedenborg during the 1860s. In Swedenborgâs precepts Inness found a vocabulary for his belief in the animating role of the divine within the material world.5 Throughout his career, Inness struggled to find a way to express this presence through the medium of paint. While in The Monk, the literal inclusion of a representative of the Catholic church contributes to a spiritual reading of the scene, the painting also points toward the works of the last ten years of Innessâs life, in which he was able to suggest the numinous solely through a subtle composition and suffused color.

Your current search criteria is: Object is "The Monk".