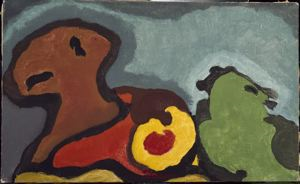 In 1930, as Arthur Dove's painting began to settle into what would become the distinguishing, formal attributes of his late work, he wrote to Samuel Kootz, a writer and art dealer then compiling a volume titled Modem American Painters:

There was a long period of searching for something in color which I then called "condition of light." It applied to all objects in nature, flowers, trees, people, apples, cows. These all have their certain condition of light, which establishes them to the eye, to each other, and to the understanding.

To understand them clearly, go to nature, or to the Museum of Natural History and see the butterflies. Each has its own orange, blue, black; white, yellow, brown, green and black, all carefully chosen to fit the character of the life going on in that individual entity.1

While Dove's paintings were pervaded with luminosity from the beginning, by the time Autumn was painted in 1935, his yearning for the "condition of light" had mounted into an almost exclusive preoccupation. The organic forms that he distilled from the natural world into the increasingly reductivist abstractions of this period were all rendered in glowing colors that radiated a certain warmth and sensuality. Dove is generally credited as being the first artist to produce an abstract painting (his work of 1910 predates Kandinsky's nonobjective compositions by a year or so); however, he recoiled from the conscious, high-minded efforts of European artists to take such a breakthrough into the area of intellectual speculation. He arrived at abstraction through emotion, not by design or deliberation. Like his friend Georgia O'Keeffe, Dove was basically after recording a "sensation" or feeling, rather than theorizing about style and its ongoing permutations.

To many critics in the 1920s and the 1930s, Dove's intuitive response to nature and the sensual, frequently sexualized, imagery in his work were read as an embodiment of masculinity. Paul Rosenfeld, in particular, observed:

Dove's compositions are built up of abstract shapes that suggest the body's semi-consciousness of itself: of intestine-like shapes, shapes of fern-foetuses in May, animal udder-forms, forms in nature which doubtlessly had a fascination for a mind unafraid of its own consciousness. For Dove is very directly the man in painting.2

Elizabeth McCausland perpetuated this kind of interpretation, noting that Dove's work "lacks the fashionable note, the stylish touch .... He sees life as an epic drama, a great Nature myth, a fertility symbol."3 During the mid-1930s, the period in which Autumn was painted, the exuberant, tumescent, natural forms that had always defined the visual language of his work became quite phallic in content. The suggestive, heaving landscapes of earlier compositions, such as Drawing, 1913 (also in the collection of the Addison Gallery), were simplified into bold, sometimes elongated shapes pulsating with color. Autumn evokes the seething rhythm of nature, at the peak of its activity, through an abstraction of bulging landscape forms barely contained by dominant black outlines.

Dove, as Rosenfeld reveals, was cognizant of, perhaps even cultivated, the sexual implications of his work. In a letter of 1930 to his friend and lifelong dealer, Alfred Stieglitz, he wrote, "The bursting of a phallic symbol into white light may be the thing we all need."4 While this recommendation issued in part from what Dove perceived were the limitations of a prevailing, but alienated, art criticism that inscribed art solely from the vantage point of pictorial analysis and reason (the antipode of emotion), the idea was one that drove the entire corpus of his work. As O'Keeffe noted, "Dove is the only American painter who is of the earth . . . . Where I come from the earth means everything. Life depends on it. You pick it up and feel it in your hands."5

Your current search criteria is: Object is "Autumn".