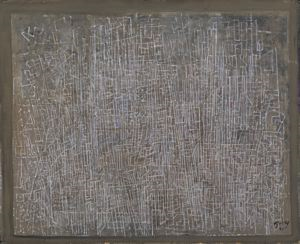 
Lines of the City

Like so many other significant twentieth-century American cultural figures, Mark Tobey was an autodidact. He never trusted the trained sensibility of the programmatically educated mind. An inventive artist given to an enduring religious fervor and a visionary view of art and life, he was also a spellbinding teacher with a large following in the Northwest and in England, where he taught during the 1930s. He could evidence considerable charm, but he could also be cold and impersonal toward the world about him. In other words, he was a bit of a ham actor.

The "white writing" for which Tobey became famous required years of practice before he understood it. This process consisted of the use of a white line to synthesize a painting and unite the image. Tobey was not a product of modernism or any of its cerebral manifestations. He rebelled against the popular critical canons of his day, eschewing Cubism, Surrealism, and Social Realism. In 1918 he took up the cause of the BÃ¡hÃ¡âi World Faith and subsequently became a noted lecturer and writer about its beliefs. BÃ¡hÃ¡âi gave him a kind of personal freedom which he could not find in the traditional religions of his background. As a child he was brought up as a Congregationalist and he had briefly felt the need to be a religious. This may have also been a need to be recognized as a leader. When religious imagery appeared in his art, the critics ignored it, for there was no way it could fit into their programs. As an isolate living in Seattle, where he had gone from New York, Tobey began teaching in the 1920s and revealed a natural skill at it. This and other small jobs sustained him until about the age of sixty-five, when his art began to provide a living.

The three works by Tobey at hand are Eventuality (1944), Lines of the City (1945), and Happy Yellow (1945). In their unrelated diversity, they are indicative of the nature of the artist. Eventuality reveals much of the general linear pattern that Tobey would develop in a painting. Here we see a cloudy white mass of lines moving freely over the surface. Few of the surface lines or those in the white-writing cloud intermingle. This presents the typical layered effect that Tobey used in his later period.

Lines of the City is an expression of the artist's interest in the architecture of large cities. The lines also provide a structure and a source of light that were the principal constructs in his work after the 1940s. This wall of vertical lines, enriched by shorter, more or less horizontal ones, makes a network of white writing. This is an early manifestation of Tobey's allover pictorial design, as well as a more formal approach to his use of calligraphic methods. The lines do not represent the calligraphy of the Orient, which did, however, serve to open up his linear drawing while it reduced his interest in following the norms of Western art. The statement of space in this picture is as inventive as Tobey's line and use of light. His interest in the line as an entity inevitably led to higher forms of abstraction. The role of invention was important to him, as it provided the individuality he desired.

A token of the various realities and visions which met in Tobey's mind can be seen in the emotional expression of Happy Yellow, the most significant of this selection of works because of its synthesis of so many features typical of the artist. It reveals his sources and also his willingness to use figurative and other motifs in an abstract manner. The white writing is here rendered in multiple colors. Tobey uses shifts in color to differentiate plane from plane and image from image. He had a fondness for a museum in Vancouver, a short distance from Seattle, with local historical objects, many of Indian origin. Memories of one image or another would blend into his layered collage method of working. He could easily incorporate museum motifs with those seen in the Farmers Market in Seattle. Tobey loved the neon lights of the large cities, San Francisco with its Chinatown moving up a hill and all the lights spread out before one, or New York with its Great White Way. Although he was made very neurotic by living in large cities, he liked to visit them for the passions of the passing parade. In Happy Yellow are numerous Northwest imagesâa sea gull, fish, a frog, and totem fragments. The imagery of nature interested Tobey, a country boy from the Midwest. Yet, in its raw, real form it was anathema to him, partly because as an adult he had a cleanliness complex. In addition to the Northwest motifs we see secreted faces and letters or other symbols which tell a story, something Tobey loved. He was, in fact, very literary, and his writing and conversation often reflected the influence of the many texts he read.

From the discovery of white writing Tobey would move to increasingly higher realms of abstraction. But like so many other artists, he often retained a submerged reference to the figure in his compositions. In Lines of the City, we have neither this nor that city, but "city" in the abstract. The various visions and realities have met in a network of lines. And so it is in many of his pictures.