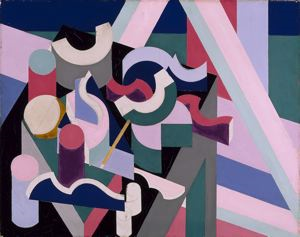 On 12 November 1936, Patrick Henry Bruce died in New York, a suicide at the age of fifty-five. Few recognized the loss then, and even today he is little known. Yet Bruce was a major American artist whose accomplishment ranks with the best of his generation.1

After initially studying with William Merritt Chase and Robert Henri at the New York School of Art, Bruce went to Paris, settling there by early 1904; he did not leave until 1936. By 1907 he had met Gertrude and Leo Stein and Henri Matisse and had begun to absorb the lessons of Impressionism and Post-Impressionism, learning to construct a painting through color chords and volumes. These lessons stayed with him throughout his life.

In 1912 he met Robert and Sonia Delaunay, and under their influence he began a series of large color abstractions that received highly favorable reviews. The only paintings to survive from this period are the six large Compositions of 1916, which were distilled from the sights and sounds of the famous Paris dance hall, the Bal Bullier. Although the first Compositions were cast in the simultaneist, Futurist mode of multiple and overlapping painterly shapes that characterized modernist abstraction up to 1916, significant differences began to appear in the final pictures of the series; shapes were fewer and more clearly modeled, suggesting distinct geometric forms of architectural still lifes. From this shift there emerged in 1917-18 the geometric still lifes that were to preoccupy Bruce from then on.

By moving from depictions of the public life of Paris to the solitary and meditative format of still life, Bruce once more engaged in a genre that he had focused on almost exclusively from 1908 to 1912. The meditative tenor of the still life suited his reserved and introspective temperament, which became more pronounced as his art increasingly met with misunderstanding, and indeed, virtual neglect. The guiding example for these paintings was the late, monumental still lifes of CÃ©zanne, whom Matisse had termed the "father of us all."

As with his earlier pictures, Bruce's late work depends to a great extent on the principles of color usage, such as the practice of gradation, the laws of harmony of contrasts and harmony of analogy, the law of simultaneous contrasts, and the use of color triads to form color chords conceived and constructed much as the composer creates music. In the Addison's painting, for example, Bruce employs a whole spectrum of variations of blue, a primary color, ranging from a light pastel shade to a virtual black, as well as red, and green, a secondary color. By contrast, he left open areas of bare canvas and rich graphite drawing, which give a particular resonance to the color and material fullness of the laboriously painted and repainted forms.

Only twenty-five of the late paintings are extant because Bruce's discouragement was such that he destroyed much of his work. Bruce, when he exhibited them in Paris, titled them either Peinture or Nature morte, but because none of these paintings are dated one cannot be sure which paintings carried which title; thus, the alternative titles have both been assigned. The Addison picture is one of a series of four containing multiple forms of similar architectural elements of "collapsed beams.â2 Thereafter, Bruce progressively reduced the number of elements he used, and his last paintings, done in the early 1930s, contain but few objects. Fortunately, the Andover still life has the original graphite drawing intact. Many of the late works suffered egregious errors of conservation in the late 1960s which erased the drawing, an intrinsic part, apparently to make them look more finished.

This painting depicts Bruce's immediate and intimate world, the contents of his studio-apartment: glasses, fruit, wedges of cheese, a pencil, and scrolled pieces of wood taken from the antiques that he collected and that filled the apartment. Bruce constructs the work by the complex joining of myriad, precipitously stacked objects that simultaneously seem frozen in space while also threatening to spill off the table. The apparent use of perspective in the rendering, a seemingly antimodernist device, is deceptive. Bruce employed not classical perspective but isometric and oblique projections, the techniques of the mechanical draftsman. For Bruce they were a means to emulate the fullness and solidity of the Old Masters without exactly duplicating them. These methods account for the abstract illusionism of the pictureâ the look of the three-dimensional is projected, but in fact nothing actually recedes, and all elements stay on the surface. Bruce both reinforces and counteracts the illusion by showing us the actual support in the areas of bare canvas.

The complexity of the painting is unrelenting, with a constant tension between movement and stasis, order and ambivalence, harmony and conflict. Bruce sought to recall a classical world, first suggested to him by the Jeffersonian ideals he had admired as a youth. But it was now a world in which he saw classical values profoundly altered, with absolute clarity replaced by uncertainty and contradiction, with the look but not the substance of classical order in place. In this tension, Bruce captured the very essence of the modern condition. That he could resolve these conflicts in an elaborate pictorial puzzle was an act of affirmation of the power of painting to convey authentic experience and feeling. In the 1920s, however, in a world that sought harmony and stability in the wake of the Great War, it was little wonder that Bruce's work, with its apparent irresolution, went without recognition. It was not until the 1960s, when artists such as Al Held, Ron Davis, and Frank Stella began to explore the possibilities of abstract illusionism, that we could grasp the radical and far-reaching implications as well as the sheer audacity of these pictures.


1. For the only monograph on Bruce, see William C. Agee and Barbara Rose, Patrick Henry Bruce, American Modernist: A Catalogue RaisonnÃ© (New York and Houston: The Museum of Modern Art and The Museum of Fine Arts, Houston, 1979). The Addison Gallery was one of the first museums to recognize Bruce by giving him a prominent place in its collection when it received the gift of Peinture/Nature morte from Mr. and Mrs. William H. Lane, the great collectors of American art.

2. The other three are in the Corcoran Gallery of Art, Washington, D.C., the collection of Barney A. Ebsworth, St. Louis, and a private collection, New York. They are illustrated, ibid., pp. 203-05.

Your current search criteria is: Object is "Peinture/Nature morte".