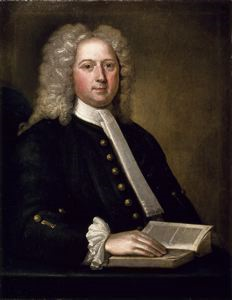 The English-born painter John Smibert (1688â1751) arrived in Boston in 1729 with the entourage of Reverend Berkeley who planned to set up a university in Rhode Island. When royal funds to support the venture did not materialize, Berkeley returned to England. Smibert stayed on in Boston and established himself as a painter of note. His notebook records 241 portraits painted in Boston from May 1729 through September 1746. As Richard Saunders wrote in American Colonial Portraits , Smibert's "arrival breathed fresh life into colonial portraiture . . . .Not only did his knowledge of London fashion make his portraits up-to-date and therefore highly desirable but his academy training in London made him far more knowledgeable about how paint should be applied to create rich modeling and delicate color balances . . . ."

In March 1734 Smibert entered in his notebook: "89. Mr. Lambert HP [20] KK 37-10-0," signifying that Mr William Lambert had made a half payment of 20 pounds toward the total cost of 37â10 for a portrait of approximately 36 x 28 inches. KK represented the kit-cat size, one of the four standard canvas sizes normally used by English and colonial painters. The full size of 80 x 50 was reserved for full-length portraits; the half-length of 50 x 40 for figures to the knees or for full-length views of children. The kit-cat format, developed by the English painter Sir Godfrey Kneller with whom Smibert had studied, showed a figure to waist-length, usually with one hand showing, while the three-quarter size of 30 x 25 included a waist-length figure without hands. Each size had a corresponding range of price; for example, Smibert charged 100 pounds for a full-length portrait of Rev. Berkeley, and generally 40 to 60 pounds for a half-size; 37â10 was Smibert's going rate in 1734 for the kit-cat.

When Smibert painted William Lambert he had been in Boston for five years, during which time he had established himself as the preeminent painter of the period. His patrons were those who were in positions of prominence and wealth in the growing colony. Mr. Lambert, born in England, had arrived in the colonies by 1731. He was the Comptroller of Customs for Massachusetts Bay. At his death in 1749 he left this portrait and the one Smibert painted of his wife to his nephew William Lambert through whose family the portrait descended until it was bequeathed to the Museum of Fine Arts, Boston. The Addison Gallery purchased the portrait in 1950 when the Boston museum sold it to enable thepurchase of Smibert's portrait of Samuel Sewell.