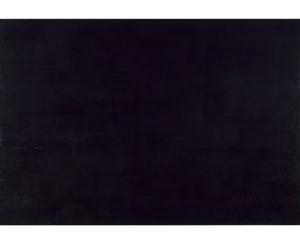 In an age of artistic bravado and personal angst, John McLaughlin's simple resolve was to remove from his paintings any suggestion of ego, of emotion, of intellectâindeed, of personality. He strove, he said, for "neutral form," by which he meant nothing like the formal experiments of other reductivist abstract painters of the fifties, sixties, and early seventies. Where others explored problems of large scale or extra-rectangular shape, McLaughlin generally kept to a basic format for his canvases; though it evolved over time, this never exceeded 48 by 60 inches.1 Other artists saw color as a product of theory or passion; his limited palette, which typically included black and/or white and one or two colors, seems almost arbitraryâif not downright eccentric, as when the paintings sport sunshine yellows and baby blues, sanitary and unmodulated. And at a time when the critical consensus was that painting was primarily about surface and flatness, he ignored planar imperfections (such as variations in canvas texture) and devoted extraordinary effort to preserving a handmade quality in his works.

Mclaughlin led a life almost entirely outside the mainstream art world, even as his work was shown regularly in major museums and galleries. He had no formal training as an artistâ in fact, he was a Phillips Academy dropout, and never earned a high-school diplomaâand he did not take up painting until he was nearly fifty years old, after long service in the military. He lived in a secluded California beach community, far from the art capitals of his day. He preferred to use small brushes to paint large areas of his canvases a single color, and carefully defined the borders between colors by hand, with only a pencil line as a guide, refusing to use tape or other masking devices. It is these things, the things that McLaughlin and his work were not, that make his paradoxical art so significant. For McLaughlin's is an art of subtraction and reduction, a self-effacing, humble exercise closer to meditation than to expression.

Those even slightly familiar with the history of Western art will see the influence of Piet Mondrian and Kazimir Malevich in the two mature paintings by McLaughlin in the Addison collection, Mondrian most obviously in Y-1958, Malevich in No. 2.2 Indeed, McLaughlin recognized the central importance of both artists to his own work. But he valued Mondrian's theories less than his own notion that "[Mondrian's] painting strongly indicates that the natural extension of Neo-Plasticism is the totally abstract.â3 And he was strongly impressed by the idea that the title of Malevich's White on White suggested, even before he saw a reproduction of the work (he probably never experienced the original).

More important to McLaughlin were the lessons he learned from Chinese and Japanese culture.4 He claimed the Zen Buddhist priest and painter Sesshu (1420-1506) as his artistic forebear, along with another Japanese painter, Sesson. McLaughlin frequently cited what he said was Sesshu's description of the "Marvelous Void.â5 The balance of color and form achieved in Y-1958, which the artist brought about by a careful melding of symmetry with disequilibrium (a visual manifestation of the notion of yin balancing yang?) , was his attempt to "neutralize" the object (the painting), thus allowing us to contemplate that Void.

If Y-1958 is the more significantâbecause it is the more innovativeâof the two paintings, No. 2 better resolves this central quest of the second half of McLaughlin's life, this pursuit of the Marvelous Void. Like other McLaughlin paintings of the late 1960s and the 1970s, most of which are devoid of color, No. 2 achieves its ends by extraordinarily minimal means. It is an image of a space both empty and full, transparent and opaque. It is a stepping-off point, an opening; a darkness contained by light; an absence traversing an emptiness.


1. McLaughlin made four diptychs and a single triptych, each element of which measured the standard 60 by 48 inches. A single larger painting was in the possession of his long-time dealer, Felix Landau, for many years.

2. McLaughlin's earliest paintings, an example of which is an untitled work from around 1947, also in the Addison's collection, are interesting mainly as documents of the extremely rapid development of his ideas. In the barely three years between his first, vaguely Fauvist landscapes in 1946, shortly after his release from the army, and the early geometric works that would lead him to his mature style, he made a number of creditable abstract paintings, many with a slightly Surrealist inflection, as in the Addison's example.

4. McLaughlin studied aspects of Far Eastern art and culture all his life. For some years he ran a modest business dealing in Japanese prints and ceramics, and in the mid-1930s he traveled extensively in Japan with his wife, Florence. So that he might be trained in the Japanese language, he went to great lengths to enlist in the military, serving first with the Marines, then with the army; he was eventually commissioned as commanding officer of a Japanese-American intelligence unit during World War II. The library he left at his death, now preserved by a nephew, contains many volumes in Japanese, as well as books in English on Asian subjects.

5. A search of the English-language literature on Sesshu and inquiries among leading scholars of Asian art have turned up no such phrase attributed to the Japanese artist. It is more likely to have been a quotation from Alan Watts or another popularizer of Zen Buddhism. This, of course, has no bearing on the significance of the concept for McLaughlin.

Your current search criteria is: Object is "No. 2".