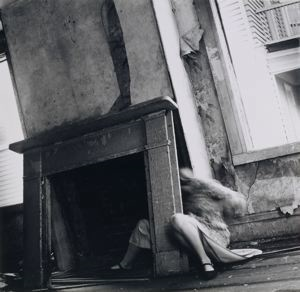 When the Addison Gallery purchased her photographs in 1976, Francesca Woodman was 18 years old and beginning her studies at the Rhode Island School of Design. Before her untimely death in 1981, she produced a powerful and sophisticated body of work exploring the human body in architectural space. House series (1975â78) was made in an abandoned house in Providence, Rhode Island. In it, Woodman used herself as subject. She is seen in dilapidated, gothic-like interiors, alternately nude or clad in a vintage dress, slipping between visibility and invisibility, sexuality and innocence. As feminist art historian Abigail Solomon Godeau has remarked of the images, the houseâa space of womanâs seclusion and worldly exclusionâânot only imprisons, it consumes.â

When the Addison Gallery purchased her photographs in 1976, Francesca Woodman was only eighteen years old and just beginning her studies at the Rhode Island School of Design. Before committing suicide in 1981 at the age of 22, she produced a powerful and extraordinarily sophisticated body of work exploring the human body in architectural space and issues of self-representation. At RISD, the artist developed what would become a signature approach to her work, often taking class assignments and developing them into extended serial explorations. Her House series (1975-78) was made in an abandoned house in Providence where, using her body as her primary subject, she staged interventions with the architecture, posing with precariously positioned doors, mantelpieces, and strips of peeling wallpaper. Moving through the dilapidated, gothic-like interior, the artistâs figure, which is alternately nude or clad in vintage dress, slips back and forth between visibility and invisibility, sexuality and innocence. In this image of the artistâs blurred figure crouching behind a fireplace, her body seems to dematerialize and meld with the house itself. As feminist art historian Abigail Solomon Godeau has remarked, in these photographs the houseâa space of womanâs seclusion and worldly exclusionâânot only imprisons, it consumes.â

In a somewhat cryptic note dating from around 1976, Francesca Woodman wrote to the Addison's then curator of photography, Don Snyder: "here they are at long last / next time i see you i can tell you some tails about my tracking of the archival man and some adventures concerning these prints." The suggestive misspelling of the word "tale" as "tail" in reference to images of herself, who is "i" and not "I ," and the search for, or "tracking" of, the mythic "archival man" pose intriguing questions to anyone approaching the work of this talented young woman. When the Addison purchased her photographs in 1976, Woodman was barely eighteen years old and was just beginning her studies at the Rhode Island School of Design. Her brief career started when she took up photography at age fourteen and ended with her suicide at age twenty-two. Despite her tragic death, Woodman achieved a remarkably precocious photographic vision. Her imagery displays an interplay between unselfconscious feminist rhetoric and the revelation of adolescent angst.

In her essay on Woodman, Abigail Solomon-Godeau presents three themes which run through the images. The first is the of the self the self: Francesca Woodman, the artist, uses Francesca Woodman, the model, in many of her images; the second is the female body as a "sight" or spectacle as a "site" for the imposition of meaning; the third is the "fetishism" of the transformation of female flesh into photographic image. In her assessment of Woodman's photographs, Solomon-Godeau applies a critique which asserts, if not a feminist motivation in the artist, then certainly a feminist reading of the imagery. While there is indeed a valid feminist discourse applicable to these photographsâWoodman was a woman and she did make images of herself with objects imbued with cultural feminine valuesâit may also be appropriate to consider Woodman's work in terms of her precocity and youthful self-reflection.

Two elements seem to be paramount in Woodman's use of photography: first, the process of transforming three dimensions into two with photographic technology; and second, the idea of the temporal manipulation inherent in photographic image making. Naturally, these two considerations are significant in any consideration of photography; Woodman, however, seems to have been hyperaware of the artifice created by photographically flattening space and fragmenting time. It is in the examination of Woodman's foregrounding of these photographic values that a glimpse of her psyche may be had.

In the image from the series of May 1976, Woodman's body is between a fireplace mantel and the chimney wall behind it. The chimney wall is located between two windows. Woodman's clothed body is headless (her head is behind the mantel) and the visible upper part of her torso is blurred. While the interplay of the spatial depth of the windows and the overlap of the wall, Woodman's body, and the mantel could suggest an illusion of three-dimensionality, they acknowledge instead the two-dimensionality of the photograph by emphasizing the surface qualities in the scene. Indeed, the slightly skewed camera angle in conjunction with the angle of the mantel against the wall and the overexposed window openings suggest intersecting patterned planes and their attempt to incorporate the organic form of the body. Similarly, while the planes are static, they are not fixed, as evidenced by the mantel leaning against the wall and the wallpaper peeling off the walls. A sense of disjunction and decay suggests the passage of time while the elemental stillness of the planar forms suggests a fragment of time captured. In addition, Woodman moves her torso during an obviously extended exposure, which blurs the upper half of her body while her legs remain still; she thereby uses her body in opposition to itself, seen as both motionless and in motion.


Woodman was an amazingly adept photographer; she staged images that are not only viewed as extraordinary in terms of artistic achievement, but also as the reflection of a young woman's introspections. According to Solomon-Godeau, Woodman stresses the photograph as a representation within a frame and utilizes objects which have very definite cultural signification, but the self-conscious appropriation and quote strategies which may inform such image making are not a part of Woodman's artistic motivation. Instead, it could be argued that Woodman, with a kind of innocent investigation of selfhood, was simply attempting to understand herself in terms of the culture she inhabited.

So, regarding the "archival man"âdid Woodman find him? Her search for such was perhaps the search for meaning both of time and space in her adolescent world. An archive is a recordâa record endowed with importance and meaning and intended for preservation; surviving Woodman are her photographs, which are the record of her existence and self-reflection. Woodman's images speak of, more than anything else it seems, Francesca Woodman.

2. The Addison purchased six photographs from Francesca Woodman in 1976, when she was a student at the Rhode Island School of Design; previously, Woodman had been a student at both Abbot Academy (1972-73), where she studied with Wendy MacNeil, and Phillips Academy (1973-74). See Abigail Solomon-Godeau et al., (Wellesley, Massachusetts, and New York: Wellesley College Museum and Hunter College Art Gallery, 1986), p. 62.

5. In both and Harm Lux and Kathryn Hixson, (MÃ¼nster: WestfÃ¤lischer Kunstverein, 1992), the image is reproduced with the title â, Providence, 1975-76â; the mount of the print in the Addison's collection is inscribed on the verso by the artist: "from the series âAbANdONed houseâ #1â and dated on the recto, "May 1976."