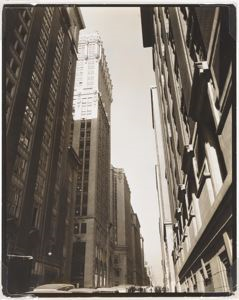 Conscious of her role as a cultural historian, Berenice Abbott aimed to record the city for her federally funded project, "Changing New York" (1935-39), so that it would "live for the eyes of the future."1 Consequently, she created a thematically diverse archive of photographs that she classified according to three main headings: "Material Aspect" (architecture, street scenes, etc.âCanyon: 46th Street and Lexington Avenue, Looking West belongs to this category); "Means of Life" (transportation and communication systems, supply of the city's food, water, heat, and power, etc.); and âThe People and How They Live."2 Further, she combined these themes whenever possible in each individual photograph so that the "facts" of the city would be "set forth as organic parts of the whole picture, as living and functioning details of the entire complex social scene.â3

In addition, Abbott hoped that her photographs would inspire her contemporaries to demand improvements to the city's infrastructure. In fact, by 1940 she could see no defensible use of photography other than for "the education of the public to an understanding of its civic responsibilities," citing the need for greater public involvement in the fields of: "civic betterment, city planning, slum clearance, public housing, park development, playground expansion, highway and traffic control, [the elimination of] fire hazards, water front beautification, [and the improvement of] essential services (markets, water supply, rapid transit as the ferries, 'els', buses, etc.).â4

Abbott's faith in the power of photography to inspire civic-mindedness reflected aspirations shared by a number of American intellectuals in the 1930s (among them, Lewis Mumford, Stuart Chase, and Charles A. Beard), who longed for the nation to realize its potential as a humanistic, egalitarian democracy.5 At the same time, her populist approach to "civic betterment" placed her in opposition to New York's most powerful urban planners, including Thomas Adams and George McAneny of the Regional Plan Association, Inc., and Robert Moses of the Port Authority of New York, who characteristically consulted politicians, conservative business leaders, engineers, and academicsârather than the people themselves.6

When seen within the context of urban planning policies in the 1930s, Canyon represents a critique of the Port Authority's proposal to double the concentration of business activity on Manhattan Island through "improvements" to the region's transportation systems. By directing her camera toward the darkened facades just north of Grand Central Terminalâone of the city's two principal gateways for commutersâAbbott exposed the dehumanizing effect that overcentralization can have on the psychic climate of the metropolis.

2. Abbott adopted these terms, which originate with the city-survey technique of the Scottish sociologist and city planner Patrick Geddes, as the main headings for her outline. Moreover, she instructed the clerks who worked for her "Changing New York" project to inscribe them on the back of her photographs. Canyon was inscribed "Code #: 1. C.,â indicating that it belonged to the main heading "Material Aspect,â and to the subheading "Canyon.â