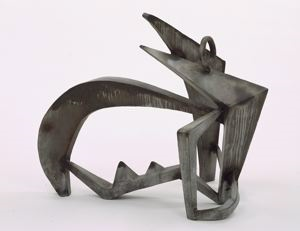 David Smith, one of Americaâs most important 20th century sculptors, brought his training as a painter and his experience in industrial manufacturing to a sculptural craft that has been described as âoften radically abstract and uncannily anthropomorphic at the same time.â In the late â20s in New York, where he studied painting with Jan Matulka and met artists Stuart Davis, Arshile Gorky, and John Xceron, Smith was introduced to Cubist and Surrealist art in European periodicals belonging to his friend, artist John Graham. Intrigued particularly by the metal sculpture of Pablo Picasso and Julio Gonzalez, Smith began to investigate three-dimensional forms. Beginning first with linear, relief-like constructions, by the late â30s he began to work with hard metals such as steel and iron that required welding (a skill he had learned on the Studebaker assembly line in his college years) rather than carving or casting. Structure of Arches, 1939, is one of his most powerful forays into fully developed three-dimensional sculpture. Part of a small group of sculptures of the same period, Structure of Arches uses bold interplay of solids and voids, repetition of jutting angles, hard edges, and molded form to create a dynamic composition that shifts and changes in its three-dimensionality. The weathered surface, the result of the first ownerâs outdoor installation of the sculpture, enhances the rugged, hand-crafted sensibility that is the hallmark of Smithâs work.