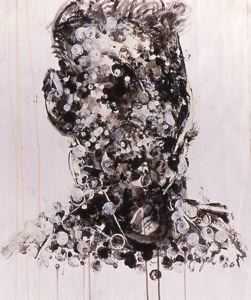 With a visionary intensity, Boston-based artist John Jagel (b. 1929) explores the psychological and emotional aspects of the portrait in the tradition of the European expressionists, Oscar Kokoshke and Emil Nolde. As Robert Taylor wrote of Jagel's work when it was exhibited in the Addison Gallery's 1983 exhibition, 4 x 4, Four Rooms by Four Artists, ''Jagel is interested in the psychological and emotional dimensions of his picture . . . .The viewpoint is emotional, sometimes deliberately anamorphic, sometimes surreal . . . ."

Although drawn from a photograph, instead of producing a recorded likeness the artist makes Beckett's face an introspective exercise in graphic mark-making inspired by the writer's existential plays, Waitingfor Godot and Endgame. It has been said that Samuel Beckett's writing offers a "picture of unrelieved blackness." Similarly, Jagel's gestural depiction of the author drips with darkness. In much the same way that literary critics found Beckett's writing dualistic, both pessimistic and optimistic, a battle between chaos and form, Jagel's portrait presents an evocative image that may express the essence of human existence.
Sarah Vure

Your current search criteria is: Exhibition is "Toward Resolution: Artistsâ Studies from the Collection [Phillips Academy Art 300]".