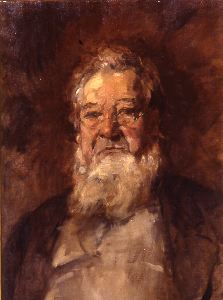 Squire Duveneck, 1877 by renowned midwestern painter and teacher Frank Duveneck, has become known as one of the finest examples of portraiture that the artist ever produced. The intimately familial, affectionate, and respectful relationship which existed between the painter and his stepfather pervades the mood and tonality of the painting, attracting viewers to its presence.

On May 24, 1824 Frank Duveneck, originally named Frank Decker, was born to Katherine Siemer and Frank Decker in Covington, Kentucky, a suburb located on the Kentucky side of the Ohio River, across from the still expanding city of Cincinnati. Although his parents first met on American soil, like many people living in the midwest and Cincinnati, they were both immigrants from Oldenburg, a German town just east of the border with Holland.

When the artist was only a year old, his father passed away. Fortuitously for young Frank, his widowed mother met and eventually married a businessman by the name of Joseph "Squire" Duveneck, who was also a German immigrant. Following his motherâs marriage, Frank adopted the surname Duveneck, although he did not legally change his last name until much later in life.

During Frankâs childhood, Cincinnati was a relatively young city that experienced several waves of immigration along with periods of rapid expansion. In 1850, when Frank would have been just two years old, the U.S. census reported a population of 115,435. By 1870, the year that Frank left Cincinnati for Munich, the cityâs population had reached 216,239. The majority of the incoming population was composed of German-speaking immigrants from Central Europe. The influence of Cincinnatiâs German, and more specifically German-Catholic, community would have a profound impact on Duveneck, who first became interested in painting as a teenager, while under the apprenticeship of a Catholic church decorator. However, as was the practice among many American artists in this time period, Duveneck traveled to Europe in order to refine his training and begin his career as a legitimate painter, but, unlike many artists who traveled to artistic centers like Paris or London, Duveneck decided to return to the land of his ancestors. In 1870 he traveled to Munich, Germany where he remained for an extended period of time. During his time in Europe he traveled to other areas, most notably Italy, where he met his wife, Elizabeth Boot; yet, it was in Germany that he earned his reputation as a skilled and highly sought-after painter and teacher.

Following the death of his wife in 1888, Frank returned from Europe to his home in Cincinnati, where his half-sister Mary Duveneck, affectionately called "Miss Molly" by her friends and family, moved in with him. She became his constant companion and caretaker until their deaths in 1919. The affectionate bond which Frank Duveneck shared with her can be seen in the carefully rendered portrait of his sister, titled Miss Molly Duveneck, in the collection of the Akron Art Museum.

The stylistic contrast between Miss Molly Duveneck and Squire Duveneck is rather substantial. Frankâs portrait of his stepfather, completed by the artist in 1877 at the age of 29, was executed with bold loose strokes and warm dark tones characteristic of his earlier Munich period, when the works of Frans Hals and other Northern European masters were still the most prominent influence on his artistic practice. Meanwhile, the portrait of his sister, painted between 1888 and 1890, was executed with a smoother, more controlled touch and lighter palette characteristic of his later work influenced by his travels in Italy. While the stylistic differences between these can be attributed to a shift in personal style effected by his travels through Europe, one friend of the Duveneck family commented in a letter to Edwin C. Shaw that Duveneckâs handling of paint when doing a portrait was directly affected by the gender of his sitter.1 Mary L. Alexander claimed that "Duveneck always made a difference in the painting of women and the painting of men. His women were essentially feminine and his men masculine. His touch for the women was light and pleasing and when he painted a man he swung at it with all the force that was behind his wonderful brush."2

While the motivation behind these differences remains shrouded in the past, it is certain that Frank Duveneckâs portrait of his stepfather captures the aging man in an affectionate and paternal light. Squire Duveneck calmly considers his viewers while peering out at them over a pair of delicately rimmed reading glasses. His relaxed and slightly reclined posture hint that he is seated in a warm and familiar interior space. Though not elderly, the beginning signs of aging can be seen in the white of his hair and the wrinkles between his brows. Meanwhile his thick hair, ruddy cheeks, and healthy appearance retain the robust masculinity of his fleeting youth. The affection, gratitude, and respect Frank felt for the man who raised him as his own is present in his confident handling of the paint and exquisite rendering of the image.

Squire Duveneck was a particular favorite of both Mary and Frank Duveneck, remaining in the Duveneck household until 1919. Following the death of both Frank and Mary in that same year, the portrait was inherited by their brother Charles, from whom it was acquired for the Addisonâs collection in 1928.


1. It was through the bequest of Edwin C. Shaw that Miss Molly Duveneckwas acquired by the Akron Museum of Art, Ohio.
2. Mary Alexander was an Art Critic at the Cincinnati Times-Star and a friend of the Duveneck family. Mary L. Alexander to Edwin C. Shaw, Cincinnati, OH, 20 May 1922, Frank Duveneck Artist File, Addison Gallery of American Art Archives.

Your current search criteria is: Exhibition is "The Works".