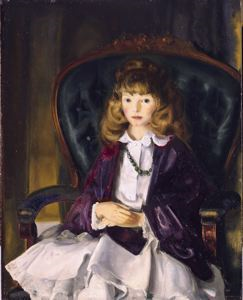 George Bellows once expressed his distaste for fashionable high-society portraiture: "Did you ever notice how like a society portrait painter is the undertaker. He too tries to get a good likeness."1 Bellows and his colleagues rejected the beautiful yet lifeless look of the prevailing high-style portraiture for one that emphasized the inner life of the subject. Although he received formal portrait commissions, Bellows was most successful when painting subjects from his personal experience. As a result most of his portraits are of friends and family members. One of many works documenting stages in the life of his eldest daughter, Anne in Purple Wrap is an example of the artist's ability to go beyond likeness and suggest the sitter's inner character.

The vibrant color and vigorous brushstroke, which so effectively capture the youthful spirit of this ten-year-old girl, reflect the impact that the 1913 Armory Show had on Bellows's work. Although he remained a realist and never distanced himself from the actual appearance of the sitter, exposure to the European avant-garde encouraged him to experiment with bold color and line and their power to convey emotion. Here the brilliant purples and greens, combined with sweeping lines and animated brushstrokes, give the portrait great psychological and aesthetic power.

In addition to borrowing from modern art, Bellows also looked to past traditions for inspiration. He wrote to his former art professor at Ohio State University: âHaving got what I can out of the modernist movement for fresh, spontaneous pure color, I am now turning my attention to the 'Secrets of the Old Masters.'"2 While the intimacy of this portrait is reminiscent of Bellows's early images of street urchins, the rich, jewel-like color, deep atmospheric space, and sculptural modeling are typical of his 1920s portraits and reveal his admiration for Old Master techniques. In drawing from art history, Bellows endows the picture of Anne with a formal grandeur that stands in strong contrast to the informality of his earlier portraits.

Another source of inspiration for Bellows's new portrait style was the American realist Thomas Eakins. After seeing the artist's 1917 memorial exhibition at The Metropolitan Museum of Art, Bellows wrote to Robert Henri declaring Eakins to be "one of the best of all the world's masters. The greatest one man show I've ever seen and some of the very greatest pictures."3 Bellows admired the artist's direct and psychologically penetrating portraits. As with Eakins, Bellows's personal involvement with his sitters allowed for candid, insightful portraits that reflect his relationship with the subject.

The dim lighting of Anne in Purple Wrap, which softens the atmosphere and envelops the figure of Anne, creates a tender intimacy suggesting the bond between father and daughter. While her white dress may signify childlike purity and innocence, Anne's jewelry and wrap connote an emerging femininity and sophistication.4 The carved Victorian armchair introduces a note of nostalgia, alluding to Bellows's awareness of the passage of time and Anne's approaching adolescence. The overly large chair seems to push her toward the picture plane as if to present her to the outside world, yet at the same time its curved frame protectively embraces her.

This armchair was a favorite prop of the artist and appears in several other portraits of this period: Katherine Rosen (1921, Yale University Art Gallery, New Haven, Connecticut) and Portrait of My Mother (1921, Columbus Museum of Art, Ohio). Each of these paintings represents a woman at a different stage of life. Depicted in Victorian settings and, in the case of Katherine Rosen, historical costume, these subjects transcend their individual personalities to become "types" or symbols of larger themes. As art historian Jane Myers has noted, "Bellows was gradually coming to the belief that profound artistic achievement involved synthesizing the ordinary aspects of the sitter with the great themes of human existence.â5 This combination of individual character and universal archetype is typical of Bellows's later portraits. In Anne in Purple Wrap Bellows not only speaks of his relationship with his daughter and her growing maturity, but he also explores the larger themes of age, the passage of time, and the cycle of life.

Your current search criteria is: Exhibition is "George Bellows: Selections from the Permanent Collection".