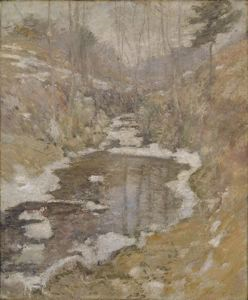 As an artist with a predilection for the intimate landscape, John Twachtman found inspiration in his personal environment. The seventeen acres on Round Hill Road in Greenwich, Connecticut, that he purchased in 1890-91 provided a setting for the development of his mature, individual style.1 Here he painted some of his best-known images.

Hemlock Pool and Country House in Winter, Cos Cob depict two of Twachtman's favorite subjects. Although he painted these motifs repeatedly during different seasons, both works demonstrate his preoccupation with winter scenes. Viewing the world under a blanket of snow suited Twachtman's creative vision, allowing him to exercise his sensitivity to tonal harmony and his interest in abstract design. While reflecting nature's moods, these paintings also represent Twachtman's unique adaptation of Impressionism, which was strongly influenced by James McNeill Whistler's aestheticism and by Japanese art.

Twachtman sought increasingly to express not only the beauty of nature, but also the emotional and spiritual solace that he found in the landscape. In a letter to his friend J. Alden Weir, dated 16 December 1891, he wrote:

I feel more and more contented with the isolation of country life. To be isolated is a fine thing and we are then nearer to nature. I can see how necessary it is to live always in the countryâat all seasons of the year. We must have snow and lots of it. Never is nature more lovely than when it is snowing. Everything is so quiet and the whole earth seem [sic] wrapped in a mantle. That feeling of quiet and all nature is hushed to silence.2

Hemlock Pool, a canvas that the artist considered to be one of his best, captures these sentiments pictorially. Located behind his house at the bottom of a steep incline along the Horseneck Brook were the serene, tree-lined slopes and pond depicted in this work. The emphasis is on the simplified, vertical composition and textured surface. Its quiet, harmonious color scheme is achieved through a layering of warm orange hues over cool, silvery gray ones. Along with the central placement of the ice-ringed pool, the high horizon line flattens the picture, causing the viewer to focus on the water's reflection of the surrounding trees. Thus captured, the sheltering circle evokes a mood of contemplative reverie.

The fishing village of Cos Cob, Greenwich, was where Twachtman established an artists' colony and held summer classes for his pupils from New York's Art Students League. Yet, in spite of the companionship of his fellow artists Alden Weir and Theodore Robinson, Twachtman's preference for solitary communion with nature is apparent in Country House in Winter, Cos Cob. The building pictured, a popular and often-painted motif, is the Brush House and store, which was one of the oldest structures in the seaside town. It was located next to the Holley House, an inn owned by Edward Holley where Twachtman and other painters used to board. With this image, he celebrated the season through an arrangement of subtle variations of white. In addition to the abstract flatness and passages of brilliant impasto, the chalky matte surface reflects the artist's previous work in pastels and his unusual painting techniques; he dried his canvases outside in the sunlight, for example, to reduce the oil and to create such effects.3

Embodying the aesthetic theories and practices of both the Impressionist and Symbolist movements, Twachtman's paintings of winter scenes record the specific visual appearance of the seasonâs light and color while also revealing his inner response to the mystery and moods of nature. We find in these images the peaceful repose that Twachtman sought in the Greenwich landscape.

2. Quoted in Kathleen A. Pyne, "John Twachtman and the Therapeutic Landscape," in Chotner, Peters, and Pyne, p. 53. Typescripts of Twachtman's letters are in the collection of Ira Spanierman, New York.

Your current search criteria is: Exhibition is "Masterworks of American Art from the Addison Gallery Collection".