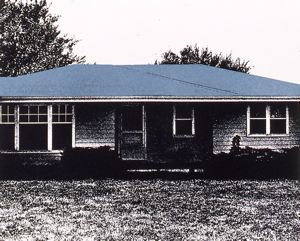 For this photographic project, conceptual artist Larry Stark drove his van throughout the United States photographing in each of the fifty states. After compiling thousands of pictures, both in black and white and color, he produced a portfolio of fifty silk-screens to create a visual diary of his road trip. From highway signs to Mobil gas stations and Jack in the Box restaurants, the portfolio provides a snapshot of the early 1970s. Many prints also suggest multiple places at once, diluting a stateâs individuality and challenging viewers to determine its exact location, implying the homogeneity of small town America.

Like Robert Frankâs The Americans of 1955â56, Starkâs The United States of America in the Early 1970s is a record of the open road. The artist once said âIâve been across the country about 80 times and I did a lot of highways. It was art for travel and travel for art.â From artists Robert Frank and Larry Stark to popular movies like Easy Rider and National Lampoon's Vacation to Jack Kerouacâs On the Road, many travelers are attracted to the countryâs vastness and take to the open road each year.

The United States of America in the Early 1970's

Your current search criteria is: Object is "Nebraska".