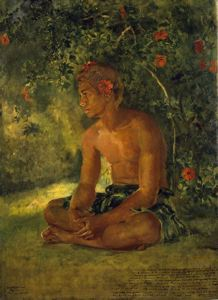 Sketch of Maua, Apia. One of Our Boat Crew

John La Farge is recognized in particular for his landmark contributions to the decorative arts. Indeed, La Farge was an American pioneer of church beautification. In 1876 Henry Hobson Richardson asked him to direct the interior decoration of Trinity Church in Boston. La Farge, in the tradition of the Renaissance artist, carried out a comprehensive program of mural painting, carving, and detailed ornamental embellishments. In addition, he developed innovative techniques in stained glass, setting the standard for the medium at the turn of the century.1 While La Farge was clearly a visionary of the interior, he was also a gifted painter.

In the company of his friend, the historian Henry Adams, La Farge made two overseas trips inspired by his attraction to what he considered exotic and primitive cultures and by his desire to make contact with them at first hand. The two traveled to Japan in 1886 and the South Seas in 1890-91. La Farge painted Sketch of Maua, Apia. One of Our Boat Crewon the second of these journeys, during his stay on the islands of Samoa, a place where he and Adams believed that they had finally found a paradise rivaling the Golden Age of Greece.

The aim of La Farge's South Seas paintings was to capture in his art "true pictures" from nature as a way to connect with "the other." He longed to find the primitive paradise of Herman Melville's Typee (1846) and Daniel Defoe's Robinson Crusoe (1719). Despite La Farge's efforts to document his voyage with drawings, paintings, photographs, and writings, his attempts to portray this Nirvana were often tainted by his cultural distance and his own supply of fantasies and visions.

Sketch of Maua is the last painting that La Farge created in Samoa and the largest of his South Seas works. Surprisingly, he began this grand oil painting during his last afternoon on the island and continued the next morning, but was forced to leave it unfinished. La Farge confirms this in his travelogue entitled Reminiscences of the South Seas (1912). He writes: "I used up my last daylight in painting a study of Maua.... And again in the morning I worked upon the sketch until the boatmen came up to tell me that the last moment was come.â2

The painting of Maua is unique in that it successfully exemplifies the physical union of La Farge's painting and writing. Not only are the dates 27 and 28 January 1891 inscribed in the upper right-hand corner, but La Farge also added a narrative text3 at the lower right of the painting, thus fusing two means of communication, the verbal and the visual, as he continued his efforts to capture the native in his own environment. La Farge, in effect, offered the viewer a lens of written text.4

A bronze man, naked aside from the brief wrap around his waist, and crowned with golden hair dyed with the coral lime of the island as was the custom of Samoan males, Maua sits in a lush, tropical setting of hibiscus flowers, which grew "in wild luxuriance in the Samoan Islands."5 Although Maua's identity as a native of Samoa appears to be clearly established, this is not a straightforward anthropological illustration. As a boatman working for Seumanu, King Mataafa's primary chief, Maua led La Farge and other visitors on excursions around the islands. La Farge describes these trips, known as a malaga or malanga, as "one of the fundamental social institutions of Samoa."6 Thus, Maua's role was instrumental in La Farge's exposure to Samoan culture. When he painted Maua's portrait, however, he divorced the man from his occupation; there are no accoutrements of a boatman, no canoe, no paddle. Instead, Maua seems to sit in unfocused contemplation.

Yet this pose is in no way ambiguous. Significantly, Maua's lotus position is that of the bodhisattva Kwannon (Kannon), "the Japanese goddess of goodness and mercy who perpetually meditated on the meaning of human life.â7 La Farge has, in effect, transformed Maua from a Samoan boatman into a Japanese feminine divinity. As a result of his stay in Japan, La Farge painted several versions of the Japanese Kwannon, for example, Meditation of Kwannon (watercolor, c. 1866, Bowdoin College Museum of Art, Brunswick, Maine) and Kwannon Meditating on Human Life (oil, 1887-1908, Butler Institute of American Art, Youngstown, Ohio), both inspired by an Oriental prototype in which the bodhisattva sits in the same lotus pose that Maua assumes here.8 The placement of a scarlet hibiscus flower in Maua's hair attests to La Farge's feminization of his model, as this ornamentation was traditionally used only by women on the island. By thus merging the worlds of bodhisattva and boatman, La Farge strays far from a realistic portrait. Despite his goalâto pursue and present the images of exotic culturesâthe picture is touched by his own romantic inclinations. It is precisely this inner conflict between the visionary and the realist that gives this painting, one of La Farge's most innovative works, its power.


1. La Farge created what is generally known as "American" stained glass, notable for its incorporation of glass overlays and opalescent glass.

3. Inscribed upper right: MAUA. / in Samoa / Jany 27/28, 1891; lower right: This is a sketch of Maua, one of Seumanuâs men and / one of our crew in the two trips around the islands of Savaii & Upolu / Maua is not tattooed (so that his legs are not bluish looking as if silk / (blue black) drawers were worn). He ought to be tattooed, but I think is / afraid of the pain. He will make believe that it is uncivilized or perhaps / will trot out the Church, for he is a leader in prayerâin any small deviltry / as well. He is not handsome as you see; but he is intelligentâI thought / I could get him to sit on that account, as it is difficult to get natives to pose well, but he / could hardly keep quiet a minute. I had only a few hours to paint this in, I was at work / when the call was made for our boat to leave for Tahiti. Hence unfinished; lower left: Deadright [illegible] / legs [illegible] color / the rest natârelleâ.

4. According to the Addison Gallery Archives (from the exhibition checklist for "Faces of the Addison: Portraits from the Permanent Collection," 22 April-31 July 1994), "This inscription was folded under by a dealer in the 1930s, before the work was purchased for the Addison. Fortunately, the prodigious early twentieth century art photographer Peter A. Juley had recorded the painting fully extended. During recent conservation, the turned-over canvas was carefully unfurled and, aided by the photograph, the conservator was able to recover the inscription and the original format for the workâ¦. The Juley photograph also has made it possible to provide a close approximation of the original frame."