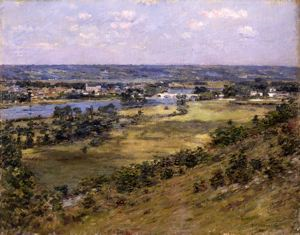 Valley of the Seine

Among the first generation of American painters to espouse Impressionism, Theodore Robinson chose Giverny, northwest of Paris, as a summer painting site in 1887, and along with fellow Americans John Leslie Breck, Willard Metcalf, Louis Ritter, and Theodore Wendel, established an art colony in the village.1 While many foreign artists were attracted to the area because of its association with the Impressionist Claude Monet (1840-1926), who had settled in Giverny in 1883, Robinson was one of the few to develop a close friendship with Monet, perhaps because he maintained Giverny as his primary residence from 1888 until 1892. His diary and letters chronicle their studio visits and discussions about art, as well as exchanges of emotional support and Robinson's inclusion in many Monet-family social events.2 Although he was not a pupil of Monet's, the Frenchman's influence was of critical importance to his stylistic development and his adaptation of Impressionism.

In May 1892, when Robinson called on Monet the day after his arrival in Giverny for the summer, the two artists discussed the series of paintings of Rouen Cathedral that Monet had completed during the winter months. Attesting to the profound effect that these paintings had made on him, Robinson wrote in his diary, "They are noble canvases well filled up and carrying a fine ideal of grandeur and solidityâ-one grey day is colossal."3 Inspired by the Rouen series, Robinson executed a series of his own entitled Valley of the Seine, during what was to be his last summer at Giverny. Unlike Monet's close-up view of the cathedral architecture, Robinson created a panoramic vista. The valley and nearby town of Vernon, a commercial center and railroad hub, are depicted as seen from a hilltop across the river. Vernon's monumental church, which was also the subject of paintings by Monet, is visible by its white spire among the town's red-roofed buildings on the left. The artist wrote of his plan to paint the same view under different light conditions. Originally with only two canvases in mind, he began the first, a brilliantly sunlit scene on the morning of 4 June 1892 (Valley of the Seine, Maier Museum of Art, Randolph-Macon Woman's College, Lynchburg, Virginal. The Addison's Valley of the Seine, started the next day, was to be painted with "cloud shadows" and "the river light against its banksâ foreground and parts of meadow beyond in shadow.â4 Robinson noted the addition of a third canvas depicting an overcast day (Valley of the Seine from Giverny Heights, The Corcoran Gallery of Art, Washington, D.C.) on 9 June 1892: "Commenced a Vue de Vernon grey day beautiful and still effect changed rather little for two and a half to three hours. Charmingâbut the sunlight with floating shadows I find more so.â5

Echoing Monet's conceptual approach to the serial format, Robinson was concerned with working only at particular times on each image in order to capture in pigment a specific, transient atmospheric effect. He commented critically on his progress and aesthetic objective when he wrote, "I must try for more purity. And not work beyond the hour chosen for the effectâthis is most important.â6 Painting on the different canvases alternately throughout the day, a technique akin to Monet's procedure in his Grainstacks series of 1891, Robinson wrote on 12 June 1892 that he "had two canvasesâworked on the firstâgrey for an hour, then the sun began to come thro' giving me a chance at the other.â7

Ultimately, Valley of the Seine demonstrates a synthesis of Robinson's struggle to reconcile Impressionist tenets with the realist practices already prevalent in his art. Previous academic training, with its reliance on controlled draftsmanship, and several years spent painting the landscape at Barbizon contributed to his reluctance to dissolve form and his use of a more muted palette than that of his mentor. In the painting, a solid geometric structure underlies the composition, with its strong diagonal expanse of hilly terrain in the foreground and a high horizon that flattens the illusion of the landscapeâs spacial recession. The brushwork records the textural qualities of the summer foliage, as Robinson refused to reduced the pictorial surface to an overall pattern of shimmering light. Accordingly, his late work remains a tribute to his own artistic vision.

Praised by Monet as containing Robinson's best landscape painting, the Valley of the Seine series marks the culmination of his Giverny period. Shortly thereafter, he returned to the United States, where he was to play an important role in supporting and disseminating American Impressionism.


1. For an extensive study of the art colony at Giverny, see William H. Gerdts, Monet's Giverny: An Impressionist Colony (New York: Abbeville Publishers, 1993). Gerdts (p. 9), referring to Pierre Tolgouat, "Skylights in Normandy," Holiday 4 (August 1948), p. 67, states that Robinson may have been introduced to Monet in 1885 by landscape painter Ferdinand Deconchy.

Your current search criteria is: Exhibition is "America and Impressionism".