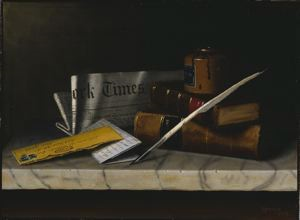 Between 1877 and 1879, William Michael Harnett produced a number of images known as writing-table pictures, of which the Addisonâs painting is an example.1 These works are strikingly similar in size and composition and in the particular combination of objects depicted. Books, an ink bottle, a quill pen, and a letter, sometimes out of its envelope, are arranged on a marble shelf or marble-topped table and set against a bare background, presumably a wall. A variable element, either money or a newspaper, completes the composition.

One of the earliest-known of these paintings is The Bankerâs Table (1877, The Metropolitan Museum of Art, New York), which, in addition to the books, ink bottle, pen, and envelope, features a stack of coins in a torn paper wrapper and several currency notes. Of the same year is Still LifeâWriting Table (Philadelphia Museum of Art), in which money appears again but in which the letter has now been removed from its envelope. American Exchange (1878, The Detroit Institute of Arts) also shows a letter and envelope separately, but it lacks the quill pen. This reappears along with the other items in Philadelphia Letter, Books, and Writing Paper (1879, private collection).

The Addisonâs painting, Still Life with Letter to Mr. Clarke, is one of the first in the series to include a newspaper and is therefore especially close to two other works that Harnett painted in the same year, 1879: Still Life with Letter to Mr. Lask (private collection) and Still Life with Letter to Dennis Gale (private collection, Chevy Chase, Maryland). Each of the three paintings includes a letter addressed to the specific individualâClarke, Lask, Galeâwhose name serves to identify the still life; in this, the three works are distinct from their predecessors, mentioned above. The letters, which are covered with a script in Harnettâs own hand, are folded and placed upside down, presumably to prevent them from becoming too dominant within the overall composition.2 While the writing is legible, the messages in all cases are cryptic and give no precise or conclusive information about the artist, patron, or painting.

The Addisonâs painting and Still Life with Letter to Dennis Gale are near replicas of one another, the major differences being changes in the patronâs name, the titles of the books, and the shape of the ink bottle. The two works are similar in another way: it is known that each was owned by the man named in the still life, although it is not clear if Clarke and Gale commissioned their respective paintings or if they purchased these after Harnett had completed them. In the latter case, it is possible that Harnett included the names of potential patrons as a way of encouraging them to buy the finished works.3 It is interesting to note that Harnett may have referred to Clarke in another painting of 1879, The Secretaryâs Table (Santa Barbara Museum of Art); a memo pad therein bears the inscription, âJune 28/See Mr. Clarke/at St. George Hotel.â

By the time Thomas B. Clarke (1848-1931) acquired the Addisonâs still life, he was on his way to becoming one of the most important collectors of American art of his day. In fact, it was in the very year in which Harnett painted his Still Life with Letter to Mr. Clarke that the first published notice of Clarkeâs significance as a patron appeared. âA number of gentlemen in this City are making private collections exclusively of American painting,â stated a writer for New Yorkâs Evening Post. âOne of the freshest and fullest of these private collections is that of Mr. Thomas B. Clarke â¦ which now contains one hundred and ten works.â4 Harnett was, at least for a time, among Clarkeâs favorite artists, and the collector acquired no fewer than nine of his works between 1872 and 1881. In fact, Clarke seems to have had a special interest in still-life painting, at least during his early years as a collector, and, according to one contemporary source, the first painting he bought was a still life.5 But as his tastes changed and became more sophisticated, he grew less interested in this genre, which was not considered high on the scale of what was most acceptable or sought after in art. As far as is known, Clarke made no further purchases of Harnettâs works after 1881, a situation which was probably compounded by the fact that Harnett left for an extended stay in Europe in that year.

Compositionally, Still Life with Letter to Mr. Clarke can be read as a simple and successful structuring of diagonals, which move across and parallel to the picture plane in the forms of the envelope and quill pen. This arrangement is interrupted by the diagonal placement of the letter and the books, which act as spatial markers to lead the viewerâs eye back to the additional diagonals of the folded newspaper. All of these straight and active lines are offset by the rotundity and verticality of the ink bottle and the more complicated linearism of the masthead on the New York Times. The almost stark whiteness of the marble shelf contrasts with the unusually dark background, which allows the objects to be spotlit by a rather intense light which comes directly from the left.

The year which appears on the newspaper corresponds with that inscribed below the artistâs signature at lower right, and the address on the envelope is that of Clarkeâs residence at the time. In fact, Clarke moved his family into the house at 203 West 44th Street in New York in the same year that Harnett painted this picture.6 Yet whatever care Harnett took to identify his patron within the painting itself, it was evidently not enough to make Clarke feel that he had to retain the picture for long. In 1881, barely two years after acquiring Still Life with Letter to Mr. Clarke, he sold it to his friend Oliver Durrell (whose son, sixty years later, gave it to the Addison Gallery). This is in keeping with what we know would become Clarkeâs habit: building up a collection and then selling it for a profit.


1. This classification was first used by Alfred Frankenstein, whose pioneering research and writing on Harnett is basic to any study of the artist. See especially Frankensteinâs After the Hunt: William Harnett and Other American Still Life Painters, 1870-1900 (1953; rev. ed., Berkeley and Los Angeles: University of California Press, 1969).

3. This point is discussed by Doreen Bolger, âThe Patrons of the Artists: Emblems of Commerce and Cultureâ in William Michael Harnett, ed. Doreen Bolger, Marc Simpson, and John Wilmerding (Fort Worth, Texas, and New York: Amon Carter Museum and The Metropolitan Museum of Art, 1992), p. 73.

5. George William Sheldon, Recent Ideals in American Art (New York and London: D. Appleton and Company, 1888), p. 22. The painting was a still life of a dead trout by Wakeman Holberton. Sheldon noted that Clarkeâs interest in the painting arose from his being an avid fisherman.

Your current search criteria is: Exhibition is "Major Works in Minor Scale".