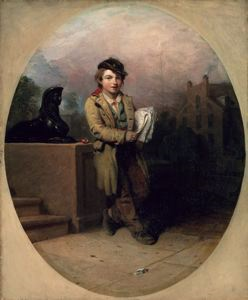 As an adolescent, Henry Inman (1801â1846) entered an apprenticeship under painter John Wesley Jarvis. He soon surpassed his teacher inboth quality of work as well as in reputation as New York's best portrait painter. Inman was to New York what Sully was to Philadelphia and he too was referred to as "the American Lawrence." This painting, standing in strong contrast to Inman's usually elegant, "grand manner'' portraiture, is an example of one of his rare experiments with genre painting.

Inman's few genre portraits were all concerned with youth. Yet, unlike his other examples, this painting is not of idyllic rural life, but of urban poverty. In contrast to the city urchins depicted by social realists of the early twentieth century, Inman's painting does not call for social reform, nor does his newsboy elicit our sympathy. As art historian Elizabeth Johns has noted in American

Genre Paintin g, Inman's newsboy is a prototype of American self-help. Though poor and ragged, he has taken the initiative to earn a living and better himself. Urban poverty has been neatly transformed into American potential.

The boy's surroundings reinforce an optimistic view of poverty and soften his obvious deprivation. The artist has removed this industrious youth from his "dangerous" peers and seedy neighborhood and placed him in the bustling and ordered world of the upper classes. He stands in front of the 1836 Astor House Hotel, New York's first modern hotel. The letters "OK'' scrawled on the wall behind him refer to Martin van Buren's nickname, "Old Kinderhook," and the 1840 presidential campaign in which the aristocratic Van Buren was defeated by "common man" William Henry Harrison. The rosy, early morning sky coupled with the clearly legible newspaper bannerhead- "SUN"- hold promise of a bright future.

This romantic depiction of urban poverty was confirmed when the painting was used to illustrate a short story which appeared in the 1843 publication, The Gift. In the story titled, "Billy Snub, The Newsboy," a young boy's hard work and honesty not only help him overcome destitution, but also help him to reform his delinquent father.

Inman's portrait was painted during a period of exacerbated urban poverty and unrest. The implication that being down and out was a temporary state to be remedied by hard work must have been most reassuring to his elite viewers.
Allison Kemmerer

Your current search criteria is: Exhibition is "Paintings from the Addison Gallery Collection".