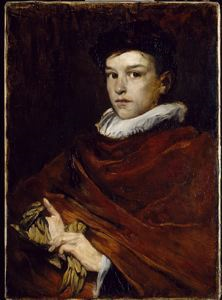 Boy with a Ruff

For American artists of the 1860s, 1870s, and 1880s, Munich, rather than Paris, was the most significant city for study abroad. Munich was a leading art center in Europe in part because the royal patronage of Ludwig I had created a culturally-minded city adorned with great architecture and art. The Alte Pinakothek displayed an excellent collection of Italian Renaissance works and seventeenth-century masters including Rembrandt, Hals and Velasquez. It was the later works that were most significant for the American students of Munich's Royal Academy. They studied and admired the dark painterly realism of these masters, as well as the work of the more recent French painters Manet and Courbet (who visited Munich in 1869). J. Frank Currier (1843â1909), Frank Duveneck (1848â1919) and William Merritt Chase (1849â1916) were among the most talented Americans to study in Munich . Their works display the dark palette, unsentimental realism, rich brushwork, and fluid impasto that mark the Munich Style.

J. Frank Currier arrived in Munich in 1871 and remained until 1898. He was the unofficial dean of the American school in Munich, serving as teacher and mentor to many of the younger artists. Boy with a Ruff exhibits the dark brown palette and intense realism for which Currier was known. Although he was the leader of the American painters in Munich, because Currier remained in Germany for most of his working years, his compatriots are today much better known.

Frank Duveneck also arrived in Munich in 1871, but traveled back to the United States for several extended periods. He was influential in exposing Americans to the Munich Style. Duveneck was also a popular teacher in America, in Munich, and later in Florence. Inhis later work in Italy, Duveneck would paint his intense portraits against a lighter ground, as in A Child of the People, painted in Florence in 1887.

William Merritt Chase attended the Munich Academy from 1872 to 1878, when he returned to this country to help found the Society of American Artists. Chase was an eclectic artist, able to create personal versions of many styles, and in The Leader demonstrates his adoption of the Munich aesthetic.

Your current search criteria is: Exhibition is "Paintings from the Addison Gallery Collection".