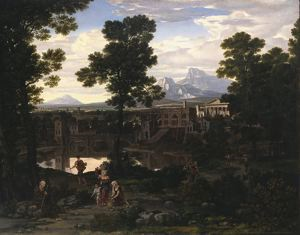 Washington Allston once wrote that the "power of infusing one's own life as it were, into that which is feigned, appears to me the sole prerogative of genius.â1

In infusing his landscapes with imagination, Allston exercised the "prerogative of genius," and in doing so helped to elevate landscape painting to a level equal to that of history painting. This achievement is readily seen in the Addison's idealized Italian Landscape. The grandeur of this work stands in contrast to the landscapes of Allston's American predecessors, whose images, while possessing a lyrical and picturesque charm, were little more than topographical views.

Quite early on in his career Allston had already formed the opinion that landscape, when it both appealed to the viewer's emotions and alluded to the great ages of the past, was as noble an art form as any other. It was not until he visited Paris and later Rome, however, that he pursued this belief and developed his own style of heroic landscape.

Allston and his fellow American John Vanderlyn traveled to Paris in 1804. There the two artists visited the Louvre, which was filled with the spoils of Napoleon's recent campaigns. Allston was particularly moved by the color technique of the great Venetian painters:

Titian, Tintoretto, and Paul Veronese absolutely enchanted me for they took away all sense of subject. When I stood before "The Peter Martyr," "The Miracle of the Slave," and "The Marriage of Cana," I thought of nothing but the gorgeous concert of colors, or rather of the indefinite forms (I cannot call them sensations) of pleasure with which they filled the imagination.2

This interest in color had most likely been fostered by his teacher Benjamin West, with whom Allston had studied in London after graduating from Harvard in 1800. West advised his pupils to emulate Titian's use of color in order to achieve sublimity and majesty. Allston was, in fact, later dubbed the "American Titian" by his German colleagues in Rome as a result of his glazing techniques, to which Italian Landscape owes so much of its resonance. Allston's method, first used by Rembrandt and then revived by the eighteenth-century British school, consisted of layering asphaltum, a thick oily substance, mixed with pigment over areas of flat color. The asphaltum gave the canvas a rich, Old Master glow because it never completely dried.3

At the Louvre, Allston also had the opportunity to view the classical landscapes of Nicolas Poussin. The clearly defined forms, crisp light, and ordered division of foreground, middle ground, and background in Italian Landscape echo Poussin's style. As Diane Strazdes has pointed out, the lake in the middle ground, the arched bridge, the boat on the opposite shore, and the jagged mountain peaks in the background are all elements found in Poussin's Landscape with Orpheus and Eurydice of 1650. The figure of a woman carrying a basket on her head, which appears three times in Italian Landscape, occurs in Poussin's Grapes from the Promised Land. Allston could have seen both of these paintings at the time of his visit.4

Allston left Paris some time in the early fall of 1804 and passed through Switzerland on his way to Rome.5 The art historian Edgar P. Richardson describes Italian Landscape as the result of combined impressions of Switzerland and the Roman Campagna, and he regards a pencil study of Mount Pilatus on Lake Lucerne that Allston made while traveling through the Swiss Alps as the basis of the central mountain in Italian Landscape.6

Upon his arrival in Rome, Allston became friendly with the large German colony of artists then present in the city, among whom Joseph Anton Koch was the leading landscapist. Although there is no evidence that the two men ever met, Allston knew several people who were in Koch's immediate circle, and at the very least, he would have been aware of Koch's work. In fact, Koch's Heroic Landscape with Rainbow of 1805 hung that year in the CaffÃ¨ Greco, a popular meeting place for the German artists and for Allston himself. Koch's painting is very similar to Allston's Italian Landscape in that it, too, depicts an ancient city set in a classically ordered landscape. Since Allston's work is not dated, it is hard to know which painting was executed first. William Gerdts, however, cites the Koch as a possible source for Italian Landscape. The mountain form in Koch's landscape is based on Swiss scenery and is similar in shape to that in Italian Landscape. Similarities can also be seen in the placement of several figures as well as some of the buildings in each painting. Finally, both artists depict the human cycle of infant with family, departing youth, and contemplative old man.7

Among the various influences on Allston, the most important may have been his friendship with the poet Samuel Taylor Coleridge, whom he met in Rome. Coleridge believed that the sublime was to be found in ideas as opposed to Burke's theory of it as something found in the wilderness. He believed that by contemplating "obscure spiritual and moral ideas,â8 by turning the self inward, one could arouse sublime feelings. In the same way, Allston believed that nature and a sense of the past were especially conducive to reflection and to the evocation of powerful emotions in the viewer. The ideas and mood that a painting projected were more important than narration or even manual skill. In depicting an ancient city and populating his foreground with generic figures, Allston creates a distance between his subject and the viewer. This psychological distance is paralleled by the physical distance suggested by the lake, which separates the warm and earthy foreground from the icy, crystalline mountainsâthe real and the ideal. The old man at the lower left, gazing at the ground, seems lost in thought. His diagonal juxtaposition to the far-off mountains creates a clear connection between contemplation and the sublime.

Despite its various influences, Allston made this work distinctly his own by masterfully blending the real with the ideal. Although the European "Grand Manner" seen in Italian Landscape was not taken up by his American contemporaries, who chose to develop a distinctly American style, Allston proved to his countrymen that landscape was a noble art form that should be pursued. He was one of the earliest American romantic painters, and his mysterious and coloristic style was to influence later landscapists such as Thomas Cole.

5. William H. Gerdts, "The Paintings of Washington Allston," in William H. Gerdts and Theodore E. Stebbins, Jr., âA Man of Geniusâ: The Art of Washington Allston, 1779-1843 (Boston: Museum of Fine Arts, 1979, p. 35. There is some debate regarding the date that Allston left Paris for Rome, which in turn has affected the dating of Italian Landscape. Although most scholars agree that it was executed in Rome in about 1805, Strazdes (p. 98) believes that Allston remained in Paris until late November, and as a result painted Italian Landscape in Paris in 1804 before arriving in Rome.

6. Edgar P. Richardson to Anne P. Peabody, 25 June 1943, Addison Gallery Archives. In this letter Richardson also cites the drawing of Mount Pilatus as the model for the mountains in Allston's Diana in the Chase (Museum of Fine Arts, Boston).

Your current search criteria is: Exhibition is "A Cloudy Symbol: Washington Allston in Retrospect".